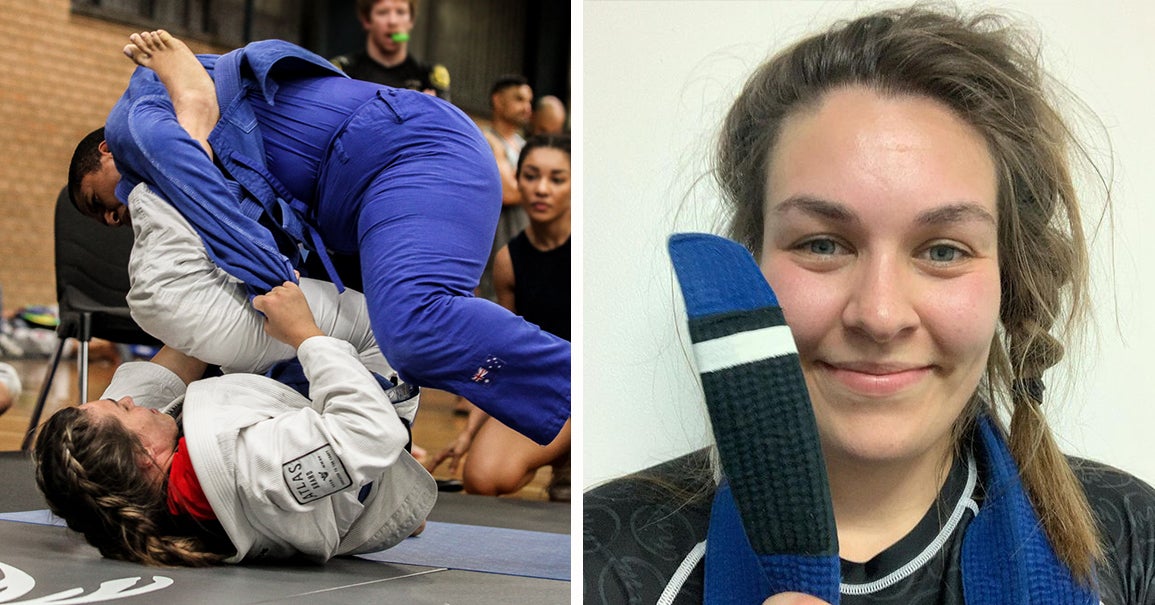 “UHH, CAN YOU HELP me tie my belt please?” I sheepishly asked the girl behind the counter, as I stepped out in an oversized white gi. It was a regular Tuesday evening in 2017 and I’d decided to try Brazilian Jiu Jitsu (BJJ) for the first time.

I’ve played competitive sport most of my life. Tennis, netball and swimming, mostly. But, like many, entering adulthood meant that afternoons once spent hitting balls back and forth across a tennis court had dissipated. Group fitness classes filled some gap in a white-collar lifestyle where physical activity is basically non-existent — but with the absence of non-aesthetic goals, a meaningful focus or competition, I found myself…well, bored shitless.

When one of my friends, who had recently started training at a BJJ gym, posted an Instagram story of bodies grappling wearing ninja-like uniforms, I knew it was something that I had to try.

As I stepped onto the mats for the first time, my belt freshly tied by the girl behind the counter, my friend told me that we had to line up and wait for the professor — the black belt leading the class. We waited for the professor in neat lines, descending according to our belt ranks — and as a white belt on my first training session, I was last. I was also one of only two women in a 20-odd person class that day.

Sixty minutes later, I was tired, confused and undoubtedly hooked — and I kept going back three-to-four times a week for the next three years.

JIU JITSU IS the hardest, most frustrating and unbelievably satisfying thing I’ve ever done in my life. Its appeal, somewhat confusingly, is in the fact that it’s just so gruelling. The joy of finally nailing a technique that you haven’t been able to get quite right is almost immediately offset by making a stupid mistake in a technique that you used to be able to execute perfectly. It is the pursuit of progress and mastery that keeps us all hooked, pushing on to decipher a puzzle that we know we’ll never finish.

It’s also the single most empowering thing I’ve ever done. I remember the first time I made one of my training partners, a man, submit during a sparring session. I’d gotten into mount position, secured my feet into the undersides of his knees, lowered my weight onto him and stretched him out. Once I had control, I worked on isolating one of his arms and putting on an Americana armlock.

Feeling his free hand tap the side of my body, indicating that he submitted and I’d won the roll, is still one of my favourite BJJ memories. Looking back on that moment, the sense of pride and achievement I felt certainly had to do with feeling like I’d made progress, but it also made me realise that I could be as good — if not better — than many of the guys.

LIKE MANY WOMEN, growing up assuming my own physical inferiority — or, in some unfortunate instances, being shown it — causes one to move around in the world in a certain way. There’s a subconscious fear that kicks in certain situations, which taught me to constantly be cautious of my surroundings; to watch out for any threats from bigger, drunker or angry-looking men; to present myself in a way that makes me appear “acceptable” in dress and behaviour; and to constantly engage in an act of self-surveillance — under the often false pretence that I have control over how men may interact with me in public or private.

While BJJ may not protect me in every potentially threatening situation that arises, it does make me feel more prepared to rise to the occasion, should I need to. Knowing how to engage in physical combat has completely transformed my relationship with my body, which goes beyond an acceptance of my appearance (although BJJ has helped in this regard, too). Having a greater understanding of what my body can do, as well as programming it to both protect and assert itself, has cultivated a deeper connection between my mind, body and soul — which ultimately helps me build more trust in myself the more I practice.

This kind of confidence you can’t teach; you can only feel it once you’ve accomplished something physically tough. And it isn’t relegated to training sessions at the gym — it fills your being and follows you into other areas of your life. I’m not scared of putting myself into tough situations and being embarrassed if I come up short. I no longer walk the streets at night fearful that I’ll be completely helpless if I’m attacked.

Any niggling, pervasive assumption that I’m weaker or less able than a man in any of life’s arenas has been shattered. And funnily enough, it’s this very thing that has helped repair my relationship with men — or more specifically, my relationship with masculinity and manhood. In seeing that I can keep up with on the mats, and therefore truly believing myself to be their equal, I am more compassionate and understanding towards men and their unique experiences in this world — which, though different, are often no more or less important, nor more or less challenging, than my own.

The strong friendships I’ve formed with many of my male training partners, who have not only helped me improve technically and helped me integrate into the community, but have evolved my understanding of gender dynamics — which is something I’ll always be grateful for.

OVER THE LAST three years, jiu jitsu has become one of the biggest contributors to maintaining positive physical and mental health. As someone who has developed anxiety in adulthood, regular weekly practice helps to me keep calm, centred and focused. The immediate benefits of training come in the form of regulating cortisol levels, which mean I often leave class in a zen-like state. I’ve found that my day-to-day energy levels are also more consistent with training. As someone who used to suffer from regular panic attacks during university, to say that I’ve not had a panic attack in years feels monumental — liberating, even.

I’ve seen many of my teammates’ physical health improve dramatically, with some losing significant amounts of weight, while others have grown in strength and improved their endurance. I’ve also seen many, myself included, come out of their shell, finding a sense of confidence that comes from belonging to a community of like-minded people, being pushed to be better every single day.

While BJJ is certainly a lifelong commitment for many of us, with the journey to black belt spanning a decade for most, the day-to-day benefits of the practice are more important to me now than ever before.

The immediate physical and mental calm that one feels after a hard sparring session has become one of my favourite feelings. As something of a chronic over-thinker, the two hours I spend focused in a BJJ class have become important moments of respite in an otherwise overstimulating world. For me, there’s not a mindfulness practice that compares to being single-mindedly focused, experiencing flow and being totally engulfed — physically, mentally and emotionally — than jiu jitsu. It’s the only space in my life where I can think of nothing else other than the technique I’m learning, or how to beat the person in front of me.

WHEN THE NSW government announced its COVID-19 restrictions and gyms began to close, I tried to fill the BJJ-shaped hole in my life with other types of physical activity. I’d go for runs and long walks — and while that definitely helped with getting a daily endorphin boost, it didn’t really scratch the itch that BJJ does.

As the months dragged on and I found myself working from home alone in a small apartment, the isolation began to manifest into feelings of confusion, loosening social ties and general melancholy. I felt the black dog rear its head for the first time in a long time. The only thing that really kept me hopeful and level headed was the thought that jiu jitsu might be back on the cards soon, should case numbers drop significantly enough.

In this period, it dawned on me how jiu jitsu fulfils a lot of my social needs, too. As soon as the gyms were able to reopen and full contact training was back on the cards, I noticed a significant improvement in my mental health and overall demeanour. Apart from being embedded in a good community and feeling a sense of belonging, there’s something in having physical contact with others that’s just good for the human psyche.

A FEW MONTHS on — and many, many training sessions later — my 2020 got significantly better when gyms reopened. Being able to reincorporate BJJ into my life has helped maintain personal balance, perform better at work, be more pleasant around family and friends and helped to reduce the stress I feel when reading and watching world news.

I realise being able to train is a privilege. I realise that this could all be taken away again should we encounter a new wave of COVID-19, or should I get injured. One day, sooner or later, my body won’t be able to handle the strain grappling places on it. But until that time comes, one good thing that came out of 2020 was a renewed appreciation of the sport that I love, as well as the coaches and teammates that enable this personal development.

What is perhaps the most amusing irony is the fact that fighting makes me a better, calmer and more balanced person. And I’m sure many other practitioners would say the same.