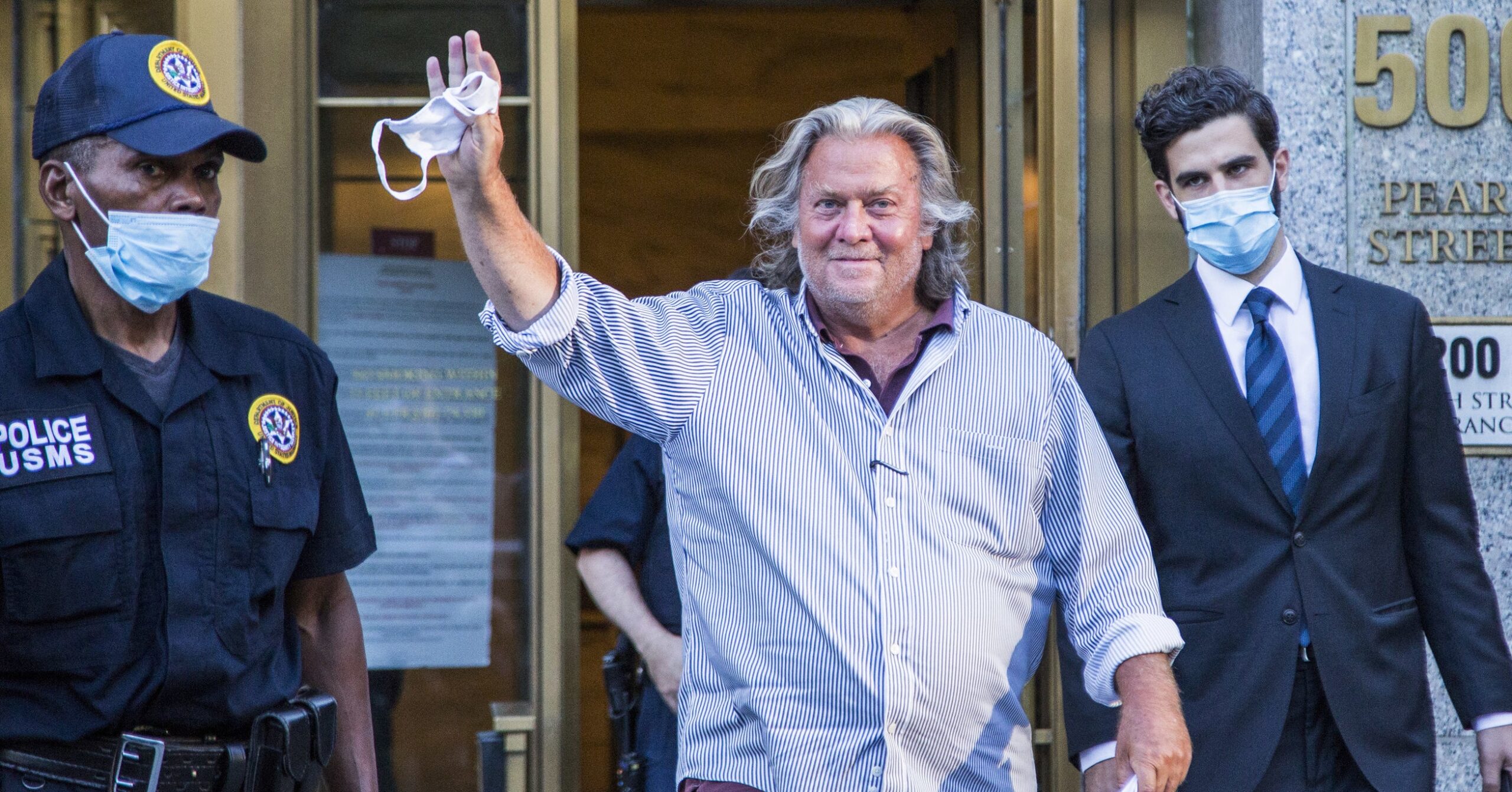 With just hours left in his presidency, President Donald Trump pardoned Steve Bannon, the vehement far-right populist who played a key role in the 2016 Trump campaign and the early months of the administration before being fired in 2017.

“Prosecutors pursued Mr. Bannon with charges related to fraud stemming from his involvement in a political project,” the White House said in a statement overnight. “Mr. Bannon has been an important leader in the conservative movement and is known for his political acumen.”

Bannon was charged last summer with defrauding donors to a “We Build The Wall” group he was involved with that promised to crowd-fund Trump’s promised border wall. Prosecutors accused Bannon of siphoning $1 million of donations into his own nonprofit. The charges laid against Bannon and his alleged co-conspirators could have carried maximum 20 year sentences. In August, Bannon was arrested by US Postal Service agents on board the yacht of Guo Wengui, a Chinese billionaire with whom Bannon is closely associated. Bannon pleaded guilty to the charges and was released on bail. Separately from the We Build The Wall case, Bannon and Guo’s company GTV media was reportedly being investigated by the FBI and SEC last summer in connection to its fundraising practices.

“I haven’t been dealing with him for a very long period of time,” Trump told reporters after Bannon’s arrest.

While presidential pardons are most commonly granted to people convicted of a crime, Bannon has only been charged.

Bannon joined Trump’s campaign as the chief executive in August 2016, leaving Breitbart News, which he had taken over after the death of Andrew Breitbart and reshaped into an aggressive vehicle for his brand of anti-immigration, anti-free trade politics. Under his tenure the site became, and remains, a vociferous pro-Trump organ. As a top campaign adviser, Bannon egged on Trump’s populist id and discouraged him from making the general election pivot toward moderation Republicans longed for. He was appointed White House chief strategist after Trump won. Bannon’s time in the White House during the chaotic first months of the Trump presidency was marked by infighting with other advisers, and he was forced out of the White House in August 2017 shortly after the violent white supremacist rally in Charlottesville, which brought a flood of attention to Bannon’s far-right connections. Bannon fell completely out of favor with Trump in 2018 after the publication of Michael Wolff’s inside-the-White-House book Fire and Fury, which quoted Bannon making disparaging remarks about Trump’s children and taking credit for Trump’s election victory. A furious Trump labeled him “Sloppy Steve” and accused him of having “lost his mind.”

Bannon sought to regain Trump’s trust, offering a qualified apology for his remarks to Wolff, but he remained in the wilderness for years. He has used his daily “War Room” podcast, launched in 2019, as a channel for defending Trump. Bannon and Guo collaborated with Trump’s lawyer Rudy Giuliani to launch the attacks on Hunter Biden last year that animated the right during the 2020 campaign. And in the wake of the election, Bannon has mounted a full-throated endorsement of Trump’s false voter fraud claims, devoting his show to promoting the latest theories and denying that Joe Biden was legitimately elected. In November, one of Bannon’s lawyers dropped him in the wall case after Bannon called for FBI director Christopher Wray and top NIH infectious diseases official Dr. Anthony Fauci to be beheaded.

Trump appears to have appreciated Bannon’s efforts, and the fallout from the Capitol riot on January 6 has reduced his stable of allies. On Thursday, Bloomberg News reported that Trump and Bannon were back in regular contact as Trump has sought advice on his attempts to overturn the election.

Bannon did not respond to a request for comment Tuesday night.