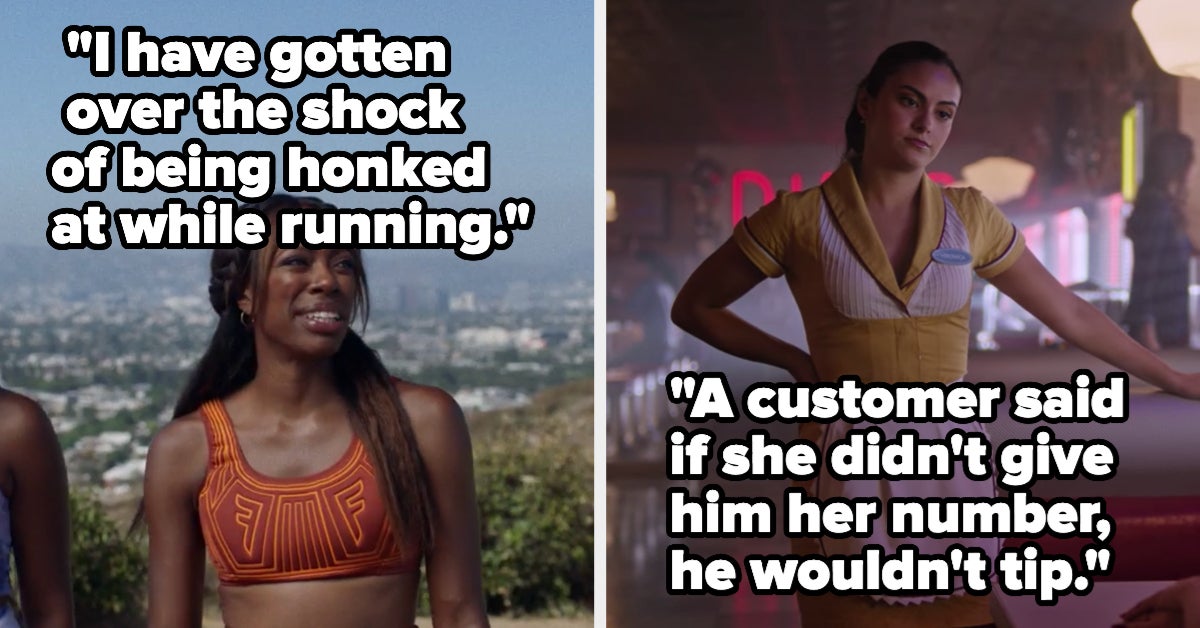 Women are sharing the ways they are sexually harassed on a regular basis, and everyone should listen up.

It started when Reddit user u/dudeARama2 asked women, “What are the subtle kinds of low-grade sexual harassment you face on a constant basis?”

Here are some of the top-voted responses from users:

“When I worked in an office, there were a lot of sales reps who didn’t care that I didn’t want to be touched, because they were huggers. Men older than my parents would shake hands with the other people in my department but insisted I stand up for a hug. When I brought it up to my boss, I was told they were old-school salesmen and to just laugh it off.”

“I work in the oil industry, which is very male-dominated. Men think they can touch you. They lead you through a door by the small of your back, touch your arm while they’re speaking to you, try to fix your collar or hair if it’s out of place, and closely lean over your shoulder when looking at your work. The kicker is that if you call them on it, you’re treated as unreasonable because it’s not like they touched your ass.”

“The entire experience of playing a multiplayer game online.”

“Being called ‘honey’ or ‘babe’ by men who are total fucking strangers.”

“The guys in my office often showing me inappropriate, lewd pics from their phone.”

“Male coworkers often stop by my desk to look down my shirt rather than look at my face when speaking.”

“My best friend used to work at Home Depot, and if she had to climb a ladder to get something, multiple men would grab her hips to ‘help steady her.’ Almost every time she worked, she would get comments or be touched by older men. She absolutely hated it.”

“My friends who work in nightclubs told me how normal it is for drunk guys to wait outside the club for them to finish at the end of the night, so most of the women got a ride home with the bouncers, just in case.”

“I worked in electronics, so it was an 8:2 ratio of men to women, and my coworkers would casually ask me about my sex life and sexual experience while we were stocking shelves, and when I told them I was uncomfortable with it, they’d jeer at me for not playing along.”

“Being physically blocked or held in place. I heard you when you said you ‘just wanted to finish the conversation,’ but if I’m trying to leave, then this isn’t a conversation anymore, you’re just monologuing and it’s clear I don’t want any part of it. You wouldn’t grab and hold a guy by his arms or block a doorway he was trying to leave out of so you could ‘just talk.’ At least you wouldn’t act shocked if you got a negative reaction to it from him.”

“I hate not being able to just go for a run and enjoy it and be completely left alone. I have gotten over the shock of occasionally getting honked at or yelled at while running. I’ve had to deal with it since I was a young teen.”

“When I was around 16 or 17, I worked in a DIY store. I had so many men ask how much it’d cost to buy me or if they could take me home with their new bag of cement. One guy even asked me what I was doing later that evening and if he could take me out for dinner. Sometimes they’d be quiet when I’d reply with ‘I’m 16,’ but other times they’d just continue.”

“I’m a hand therapist. I have to show people how to massage their scars effectively after their surgery. To do this, I have to put cream on their scar and then demonstrate it. I’ve lost count of the amount of times a man has tried to ‘hold’ my hand back, or make some lewd comment about how I can massage elsewhere if I like.”

“Having a conversation only for them to end it by getting really close and saying ‘You’re very pretty,’ ‘You’re very beautiful,’ ‘Every guy should want you.’ It doesn’t sound bad, but they say it in this deep whisper tone and get uncomfortably close. For me, it always happened after a short conversation about something normal, like asking directions.”

“I am an engineer, so I’m very used to being in a male-dominated workforce. As others have mentioned, the casual touching is one that really gets me. Another is the constant unwanted random people who see a woman in the office and feel the need to talk to her. It is worse if you sit on an aisle. Telling them you’re busy doesn’t work. They just keep on talking.”

“Being touched on the waist when a man is trying to get by me, even when there is plenty of space. I always say ‘Don’t touch me.'”

“Once, I was in the store with my 5-year-old daughter, who was carrying a feather duster we were buying, and an old man leered at her and said she needed a French maid’s outfit.”

“The guys in my office often make comments on other women’s butts or chests loud enough to be overheard, often in the few minutes before meetings start.”

“When I was in university, my housemate’s younger sister came for the weekend. She was 14 years old but dressed mature and wore a lot of makeup. When we were walking in town, a group of guys in their mid- to late-thirties were casually shouting that they wanted to fuck her and the ways they’d do it. I remember saying openly that it was disgusting and how young she was and looked. She said she was completely used to it.”

“My friend and I were at a restaurant when we saw a male customer kept harassing a waitress and telling her if she didn’t give him her number, he wouldn’t tip her. No matter how many times she kept politely declining, he wouldn’t let up. So, before we picked up our order, I casually walked up to her and acted like I knew her. She was relieved I walked up, ’cause it was only him in her section of tables.”

“I worked for a boss who used to kiss his female employees and talk about things he’d done to other women he’d worked with, like getting a woman who wore skirts to go up stepladders in his last job.”

“I once saw a young girl and an older guy talking at a bus terminal, and overhearing them, it was obvious she didn’t know him. He kept on asking her where she lived, if she had a boyfriend, and she just kept doing that nervous laugh and deflecting. I pointed it out to an inspector who was kinda close and he distracted the guy while she got on her bus and left.”

“When I worked retail, male customers would hold me hostage to talk to me about anything that came to mind because I was ‘just so kind’ and ‘such a beautiful woman.’ I started wearing a ring on my left hand, and then they would still hold me hostage, but then say ‘He’s a lucky man!’ when they left.”

“From the time my daughter was about 13, men in other cars would just openly gawk at her when we were waiting at lights or in traffic. Like, dude, you aren’t invisible, you know.”

“When I give men their change, they don’t grab it, they grab my wrist, then drag their hand down over mine and then take the change. Because of this, I started putting their change down on the counter. But because of that, I’ve had men get offended because doing so seems disrespectful and have reported me to my boss.”

And “Everything guys say to me because they know they can get away with it. Just little dirty jokes here and there, nothing too harmful, just enough to make me uncomfortable. But if I say anything about it, I’ll come off like a reactionary bitch, and I think they know they can press their luck because of that.”

Submissions were edited for length and/or clarity.