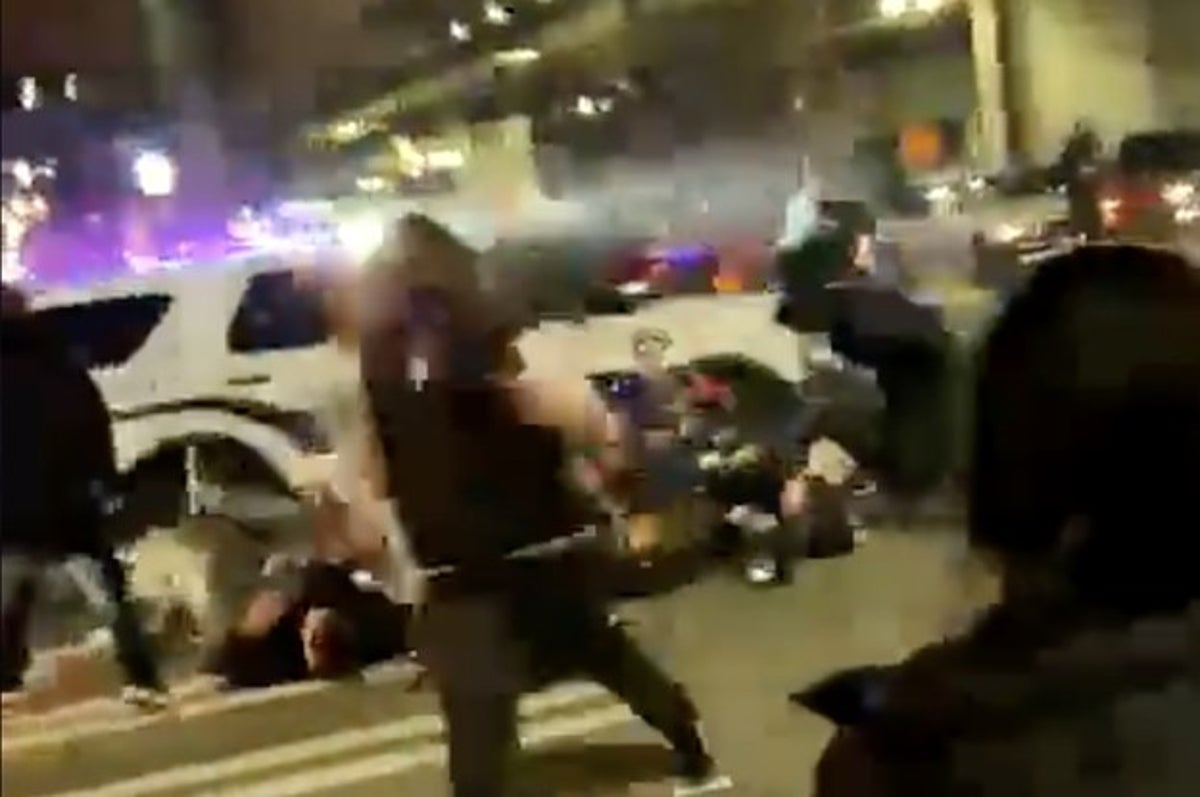 
Graphic videos show a police SUV ramming a crowd and running over at least one person in Tacoma, Washington, on Saturday.

In videos from the scene, the police SUV revs its engine while a group of people surrounds it in the street. The SUV briefly backs up and then charges forward as people in the crowd scream. One person can be seen on the ground as the front and rear wheels of the vehicle roll over them.

At least two people were taken to the hospital after the incident. Capt. Dan Pashon, a spokesperson for the team now investigating the actions of the officer involved, said he did not have any updates about the person who was run over, but said the injuries were not believed to be life-threatening. The second person has since been released, according to local Fox affiliate Q13.

Police received calls at about 6:20 p.m. that the crowd of about 100 people and cars were blocking the street at South Ninth Street and Pacific Avenue, according to the press release.

An eyewitness who asked to be identified only by his first name, Mark, told BuzzFeed News he had been out to dinner with friends and went outside to have a cigarette when he noticed the commotion on the street.

Mark, 34, said there were five or six cars doing doughnuts in the road and estimated that there were about 50 or 60 people in the crowd.

At least one car can still be seen doing donuts in a video Mark shared with BuzzFeed News as the police car arrives. He said the crowd swarmed the police car and seemed to be attempting to block its path.

“It looked like the crowd of people that were involved in the rally … all swarmed toward the police car, it seemed to stop the car, and give an opportunity for the drivers to get away,” he said.

Mark said he thought four or five people had been hit by the police car, and he added that after it rammed the crowd, people started screaming. “People were screaming and yelling, ‘Tacoma Police just ran someone over!'”

According to police, members of the crowd hit the SUV’s body and windows.

“The officer, fearing for his safety, tried to back up, but was unable to do so because of the crowd,” the Tacoma Police press release said.

Police spokesperson Wendy Haddow told the News Tribune that the officer feared the crowd would break the car’s glass, and that caused him to speed away.

After the incident, a small crowd gathered to protest, and Q13 reported that at least one person was taken away in handcuffs.

City Manager Elizabeth Pauli said the officer driving the SUV had been placed on administrative leave and that the case has been turned over to the Pierce County Force Investigation Team. The multiagency law enforcement team investigates the use of deadly force by officers in the county.

“I am concerned that our department is experiencing another use of deadly force incident,” interim Police Chief Mike Ake said in a press release. “I send my thoughts to anyone who was injured in tonight’s event, and am committed to our Department’s full cooperation in the independent investigation and to assess the actions of the department’s response during the incident.”