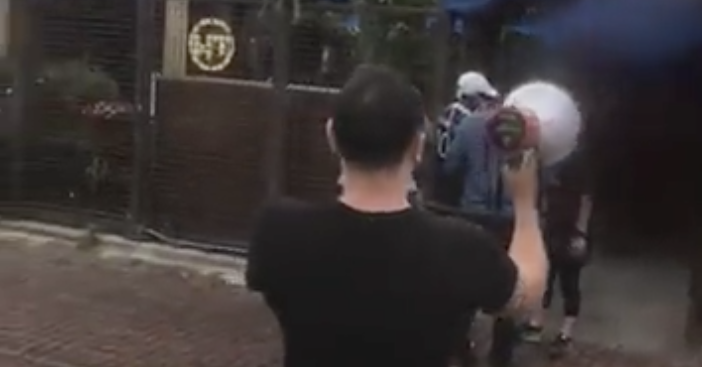 
Two people who protested outside an Ohio restaurant last summer are now facing assault charges because an employee claimed she suffered hearing damage from the sounds of their megaphones.

Last week, a Cuyahoga County grand jury indicted Josiah Douglas, 25, and Sydney Yahner, 21, on one count each of “felonious assault” in connection with the July 12 protest in the alley behind the restaurant TownHall in Cleveland, court documents show. Yahner pleaded not guilty, according to online court records. Douglas is scheduled to be arraigned next month.

In a statement Thursday, their attorney, Peter Pattakos, called the decision to prosecute the two “outrageous” and said the charges sent a “chilling message” to anyone wishing to exercise their right to protest.

“Even if the defendants are acquitted, substantial damage is done. And here the damage is exponential due to the chilling message sent to anyone intending to exercise fundamental protest rights in the area,” Pattakos said in a statement on Facebook.

A spokesperson for Michael C. O’Malley, the county prosecutor, did not immediately respond to BuzzFeed News’ request for comment.

The protest, organized by the local group With Peace We Protest, was one of several demonstrations held outside the restaurant after its general manager made a racist comment on Facebook in May. According to the Cleveland Scene, a local newspaper, the manager wrote, “If you hate this country so much go back to the one you came from,” in response to someone who raised concerns about how the restaurant was handling the coronavirus pandemic.

The weekly newspaper reported that the restaurant had been cited in a warning letter after city officials found staffers weren’t wearing masks and that proper distancing and temperature checks weren’t being enforced.

“Townhall thinks they can deflect their misogynistic, sexist and racist behavior and cover it with Health statements. Let’s give Bobby George a run for his money,” a description written by With Peace We Protest for a June 19 demonstration stated, referring to the restaurant’s owner.

The description for the July 12 demonstration said, “Continuing our protests against TownHall and Bobby George, we will pop up outside TownHall on Sunday. Please wear masks. They might not wear them in the kitchen or when rolling silverware, but we will have ours on!”

Videos from the event showed a small group of demonstrators standing across the street from TownHall’s back entrance, occasionally using megaphones to tell stories about alleged racist and sexist incidents at the restaurant and blare a siren sound. They were also seen arguing with at least one maskless patron about COVID-19 health precautions.

According to a police report obtained by BuzzFeed News, Yahner and Douglas were observed using megaphones to “blast the police sounding siren” toward the restaurant during the July 12 demonstration. The detective who wrote the report said he saw Yahner “pointing her megaphone in the direction of the victim and patio activating the blaring siren, over and over again.”

Shortly afterward, the employee, who had been posted by the patio gate, walked toward the bar “holding her ears and visibly shaking,” the report stated. The employee, identified as Jacqueline Boyd, told the detective she thought she “lost the hearing in [her] ear because of that blowhorn,” before leaving the bar.

During the protest, Boyd called 911, saying, “This woman keeps blowing a blowhorn in my ear outside of TownHall and my ear is, like, really hurting and she won’t go away,” according to the police report.

“I can’t even hear out of my right ear,” she added.

The report stated that on July 14, she was examined by a doctor and complained of a ringing noise and discomfort in her right ear. That same day, Boyd, who is identified in court documents as the restaurant owner’s cousin, filed an application for a civil stalking protective order against Yahner and Douglas, requesting that they and With Peace We Protest “stay more than 500 feet” from her home and workplaces, according to a brief filed by their attorneys in September. A temporary order was granted July 15. The case is still pending.

At a July 28 follow-up examination, Boyd continued to complain of hearing loss and a ringing noise in her right ear. She also said she was having headaches, according to a synopsis of the exam included in the report. During the appointment, she was told her hearing loss was “most likely permanent,” the report said.

In his statement, Pattakos described Boyd’s claims as “retaliatory lies,” saying that the restaurant owners were “intent on silencing First-Amendment-protected activity outside of their establishments.”

“This protest was closely watched by numerous on-duty police officers who were precisely assigned to observe it, none of whom saw any reason to intervene despite Boyd’s repeated requests that they do so,” Pattakos said.

He added that “at most” his clients came “within a few feet of Boyd two or three times, for a few seconds at a time, only in an effort to get the attention of the same police officers with whom Boyd was attempting to speak because a George-family friend was flashing a gun at the protesters on TownHall’s back patio.”

“We’re hopeful that O’Malley comes to his senses soon and dismisses these charges,” Pattakos said. “Otherwise, we will look forward to proving our clients’ innocence and vindicating their rights in court.”