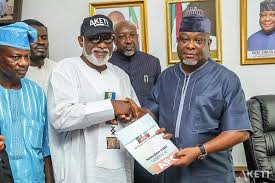 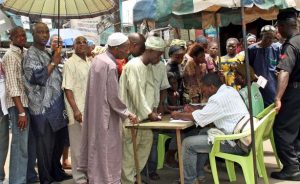 The electoral commission, INEC, has formally declared Rotimi Akeredolu the governor-elect of Ondo State.
Mr. Akeredolu of Nigeria’s ruling APC scored 244,842 votes to defeat 27 others in the governorship election held on Saturday.
Eyitatyo Jegede of the PDP came second with 150,380 votes while Olusola Oke of the AD scored 126,889 votes to come third, the INEC returning officer, Abdul-Ganiyu Ambali, said.
Mr. Akeredolu, a Senior Advocate of Nigeria, will take over office from the outgoing governor of the state, Olusegun Mimiko of the PDP.
Mr. Akeredolu is a former president of the Nigeria Bar Association and enjoyed the support of President Muhammadu Buhari and majority of the members of his party during his campaign.
The lawyer won the election despite not enjoying the full support of some leaders of his party, including ex-governor Bola Tinubu of Lagos and his loyalists. Mr. Tinubu, as well as Governors Akinwunmi Ambode of Lagos and Rauf Aregbesola of Osun boycotted all the campaign rallies of Mr. Akeredolu.
Mr. Akeredolu won in 14 of Ondo’s 18 local governments to clinch victory including surprise victories in the two local governments of Akure, the state capital, considered a stronghold of the PDP.
The first runner-up, Mr. Jegede, had a troubled campaign and was not officially declared candidate by INEC until Wednesday, less than three days to the election. He and his party’s call for postponement of the election was rejected by the electoral commission. He won in two local governments, both in Ondo town.
The second runner-up, Mr. Oke, was a member of the APC until he lost the party’s primaries to Mr. Akeredolu. He alleged fraud in the primaries and subsequently joined the AD. He also won in two local governments, Ilaje and Okitipupa.
Report from Nigeria