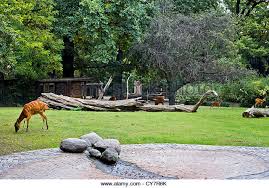 Brief history (note: you can download and view full report with pictures and tables using the link at the end of this article)
The University of Ibadan, Zoological Garden was established in Ibadan north local government area of oyo state in 1948. It was established primarily as Menagerie (where few species of animals were kept) to support teaching and research in the Department of Zoology of the university of Ibadan. The zoo was initially operated as a mini zoo until 1974, when the goal of making the zoo of international standard was achieved under the administration of Sir Bob Golden, a European, a curator and the Director of the zoo as at that time. Sir Bob Golden liased with some foreign countries in acquiring some species of wild animals like the Gorilla that was brought from Cameroon although its dead and embalmed now, the henya that was gotten from Kenya and some other animals.

Basically the University of Ibadan zoological garden, practices Ex- situ conservation which entails conservation of animals outside its natural habitat. This done to ensure the existence of these animals and to prevent some of the animals whose existence are endangered from going into extinction. The management does its best in providing a suitable habitat for these animals, feeding them with the right food for continuity of these species.
Zoo management structure
The management of the University of Ibadan zoological garden is paddled under the administration of a director appointed for a of tenure of two years from the zoology department, University of Ibadan. The director is elected from the zoo managing council which comprises a representative from the Vice-Chancellor’s office, the departments of veterinary medicine, zoology, wildlife and fisheries, the bursary and the Dean, faculty of science. During my training in the zoological garden we had a change of administration as Dr (Mrs) Olajumoke Morenikeji handed over the baton of power to the newly appointed director Dr Akindayo A.S. The director has the responsibility of implementing the board’s decisions. He also coordinates all units and all personnel in the Zoo for effective administration. The administration office comprises of the secretary and the clerks. They are responsible for all the administrative activities in the zoo. The zoo keeping units is made up of the curators, supervisors, senior and junior zoo keepers. The have the responsibility of seeing to the day to day up keep of the animals, they also make daily health observations which is directed to the supervisors in charge of each section. There is also the security unit who provide security for the animals, visitors and workers. The gardeners are those who render the service of keeping the zoo clean while the account unit takes control of the revenues generated from the zoo they are accountable to the university authority.

Methods of acquiring animals to the zoo.
By birth.
By purchase.
Through donation.
Exchange.
Animals can be acquired through stray means: Animals that are gotten by accident or that are caught in the wild..download and view full report
contact Michael : +2347035676312
email: [email protected]