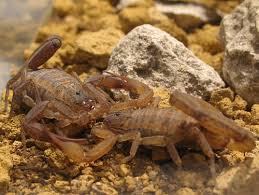 Scorpions are arthropods, arachnids who make up taxonomic order Scorpiones. Within Scorpiones are 13 families of scorpions comprising more than 1,700 distinct species. A few species reproduce asexually, but most scorpion reproductive cycles have a single basic pattern.

Mating starts with the male and female locating and identifying each other using a mixture of pheromones and vibrational communication. personally i have reared scorpions, and i get lost in wonder as i observe what happens in the human folk, being efficiently replicated in these arthropods. i have accepted the fact that animals have feelings, and if they do, they must have a mind, and if they do, that explains why they can have emotions, one of which is the natural desire for sex, which is nature’s purpose for perpetuation of life.
Shop Ball and Kerr products at FreshPreserving.com

In the promenades a deux, which is more common, the male scorpion deposits a packet of sperm on the ground and guides the female in a “dance” by her over the ground. During this movement, the sperm is picked up by the female genital opening and used to fertilize the eggs of the female.

In the “fake fight” the two scorpions come together in what would seem to be a fight to the uninformed observer. Their tails touches, lower abdomen raised. The mail during this “fight” locates the female genital opening and injects the spermatozoa.

One strange thing about scorpion mating is that if  after mating the male didn’t escape fast, he could be attacked and eaten by the female.( looking at this, off the record, This brings concern on the fate of the male folk in the animal and human world.(as in the case of praying mantis, where the female beheads the male at the peak of copulation) this we will look into in another topic.)

Unlike some other arthropods, the female scorpion does not lay eggs. She keeps the fertilized eggs inside her body until they hatch, at which point the baby scorpions emerge

When fertilization, occurs, the young ones develop inside the mother, and are born live as whitish miniature scorpion, which moults a number of times, changes colour, and leaves the mothers back to lead its own solitary life.