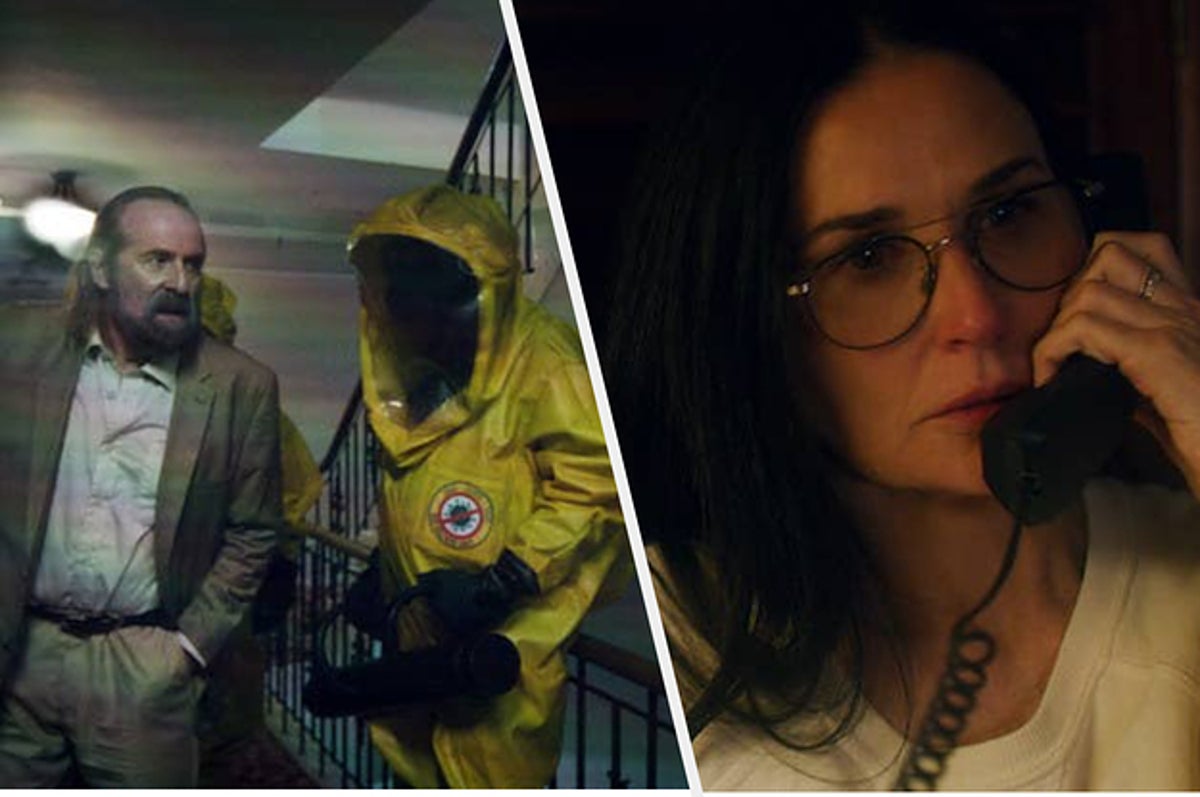 Songbird director Adam Mason was in preproduction on another long-awaited passion project when the world shut down in March. The coronavirus pandemic left him fearful for his family’s safety and at the thought of not being able to work.

So immediately into the shutdown, Mason and his writing partner, Simon Boyes, channeled their worries into writing the script for a film that would eventually become Songbird, released on Dec. 10 as a premium video-on-demand rental. The film, which was produced by Michael Bay and stars Demi Moore, KJ Apa, Craig Robinson, Bradley Whitford, and Sofia Carson, is also slated to premiere on a major streaming service sometime in 2021.

Songbird, set in Los Angeles in 2023, is a dystopian film about people who have been living through a pandemic for three years. The movie features scenes of empty streets, characters quarantined inside their homes, people using FaceTime and performing music on livestreams to connect with each other, and government employees wearing hazmat suits while removing infected people from their homes.

For Mason, it was cathartic to write and direct Songbird, drawing from the horrors of reality to paint a picture of what life could look like if the COVID-19 outbreak lasted years beyond 2020. But he also knows it might be too soon for some people to watch a movie about a pandemic while we’re still living in one.

“I completely understand if you want to be like, ‘fuck that movie,’” Mason told BuzzFeed News, “but the fundamental message with the movie is hopeful for me. That was what I was really trying to get across. I was not in any way trying to make a negative movie that capitalizes on what is by anyone’s standards a terrible, terrible time.”

Songbird currently has a 11% rating on Rotten Tomatoes. Critics are saying it’s one of the worst movies of the year; others are calling the filmmakers “greedy and exploitative” to make Songbird in an attempt to profit from COVID-19, which has killed more than 300,000 people in the US.

“I would hate to think that I contributed to any negativity,” he added. “I was really setting out to make something that was cathartic, not just for me but for anyone who might watch the film.”

Apa’s character, Nico, a courier who’s immune to COVID, is the film’s protagonist. He’s in a relationship with Sara (Carson), although the two have only ever interacted over FaceTime since they “met” during the pandemic. When the government is notified that Sara’s grandmother has fallen ill with the virus, Nico goes on a dramatic chase across LA to find an immunity bracelet for Sara so the two of them can escape the city, which is under militia law. During his journey, he seeks help from a rich family whom he often makes deliveries to, Piper and William Griffin (Moore and Whitford), because of their access to counterfeit immunity bracelets.

Mason said he wanted to portray a “class divide” that shows how people endure a pandemic depending on their economic status.

“I was really trying to make a point about the differences between the haves and the have-nots in society,” Mason said. “I was thinking of A Tale of Two Cities, and I loved the idea of this kind of class divide. There aren’t many cities that are more cosmopolitan than LA, and there is that real sense of the rich/poor divide here.”

While critics are panning Songbird, other pandemic movies, like the 1995 film Outbreak and Steven Soderbergh’s Contagion, experienced a surge in viewership in March, when the World Health Organization declared the outbreak a pandemic. Mason said, ironically enough, when his wife put on Contagion at the beginning of the lockdown, he “couldn’t watch it because it was just too real.” But according to the director, it was the success of these films that inspired the launch of his movie.

“Songbird originally started as a monster movie, almost like Cloverfield or something way more fantastical, and it was actually [producer] Adam Goodman that was very interested in the fact that so many people were watching Contagion and Outbreak,” Mason said. “There was a period where they were the most-watched movies in the world, and I kind of had to agree with him.”

While the early versions of Mason and Boyes’ script featured an actual monster “as a metaphor for what we’re all going through,” the final version ultimately shows COVID as “a horrifying invisible monster.”

But he hadn’t anticipated that the COVID-19 pandemic would become so polarizing, ideologically dividing people instead of bringing them together.

“A lot of things have happened this year in terms of how it became politicized, whether it was mask-wearing or just debates about how seriously people took the virus,” he said. “The world quickly became more dystopian than anything I could imagine.”

According to the filmmaker, Songbird was the first movie to be up and running again in Los Angeles after productions shut down in March. The cast and crew were navigating new protocols to keep everyone safe on set in the middle of a pandemic, and yet Mason said there was still “a real feeling of togetherness and this sense of a collective experience” between everyone behind the scenes.

“I was constantly trying to second-guess myself about whether or not it was appropriate to make a movie about COVID while we’re all going through it,” Mason said. “I couldn’t deny that as a central conceit, it was incredibly powerful. And it was somewhat cathartic for us to be making this movie while we’re all going through it. And fundamentally, I was hoping that that would translate to an audience.”