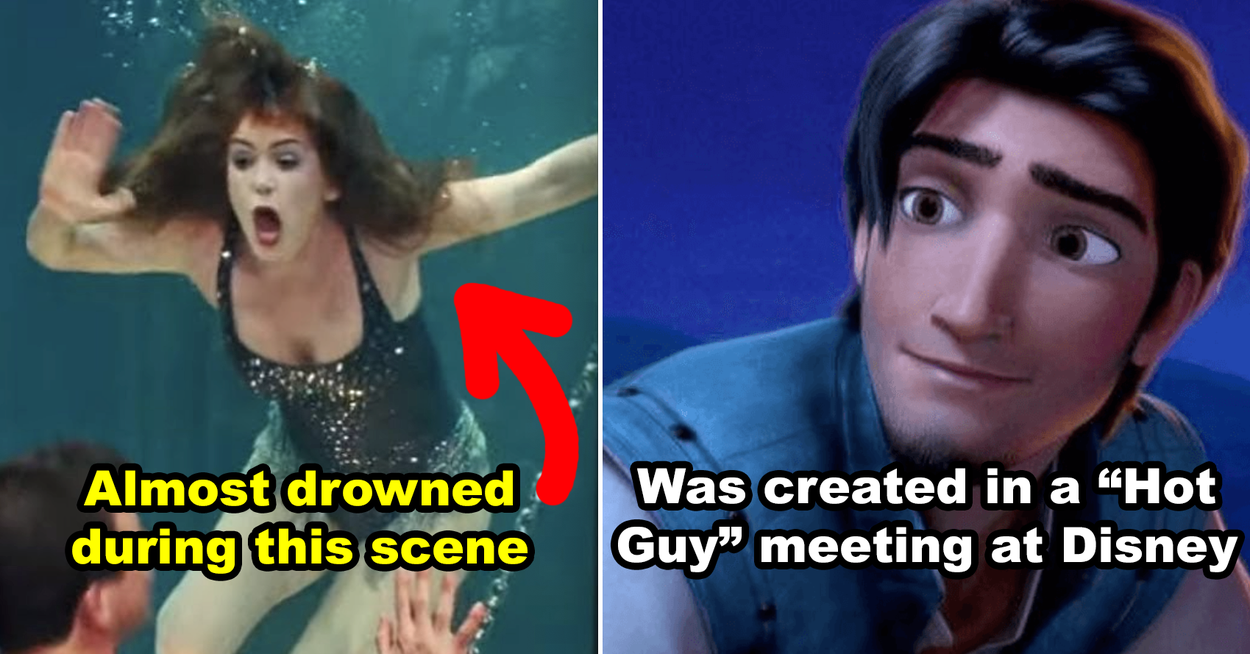 Throughout the years, we’ve asked the BuzzFeed Community for the coolest and wildest movie facts they know. Here are the fascinating and true results.

🚨 Spoilers ahead! 🚨Also, not all submissions are from Community users.

In Now You See Me, Isla Fisher almost drowned in front of the entire cast and crew while filming a scene with an underwater magic trick.

Flynn Rider’s appearance for Tangled was designed during a “Hot Guy Meeting” where women from the studio picked out their favorite physical attributes from pictures of Hollywood’s leading men.

Julie Andrews was actually flung into the mud every single time the helicopter passed her while filming that iconic hilltop scene in The Sound of Music.

In Joker, Joaquin Phoenix lost 52 pounds to play the role of Arthur Fleck.

In The Incredibles 2, Frozone’s wife (Honey) was set to finally make an appearance, but they unfortunately cut her scene for two key reasons.

Gene Wilder read the script for Willy Wonka & the Chocolate Factory and only agreed to play the part if his character could limp out of the factory and then do a somersault.

In It: Chapter Two, a record 5,000 gallons of fake blood (the most for any movie ever) were used to shoot that iconic bathroom scene.

Chris Farley was originally cast as Shrek, and he even recorded most of his lines for the movie before his death.

Sylvester Stallone wanted to make sure the boxing scenes looked so real in Rocky IV that he instructed Dolph Lundgren to actually hit him. A punch to the chest left Stallone in the ICU for nine days.

In Spider-Man: Far From Home, Samuel L. Jackson improvised the iconic “Bitch, please. You’ve been to space” rebuttal after Peter claimed he was just a neighborhood Spider-Man.

Gene Kelly insulted Debbie Reynolds’ dancing so much while filming Singin’ in the Rain that she once hid from everyone under a piano, crying.

In Call Me by Your Name, Timothée Chalamet wore an earpiece while shooting the fireplace scene so he could listen and react to the song that was played in the actual movie.

Jackie Cooper couldn’t make himself cry while filming a particular scene in Skippy, so the director threatened to have Cooper’s dog killed if he couldn’t produce tears.

In Candyman, Tony Todd had to fill his mouth with real bees during that trademark scene, and he got stung several times because of it.

In Mamma Mia! Here We Go Again, Cher was basically forced to be in the sequel by the head of Universal Studios.

Cleopatra was one of the most expensive movies to ever be made. It had an original budget of $5 million, but after two years the film still wasn’t finished, and more money kept being put into it, totaling over $370 million by today’s standards.

For A Star Is Born, Bradley Cooper spent six months with a dialect coach trying to imitate Sam Elliott’s voice…before he even knew Elliott was going to be cast as his onscreen brother.

Buster Keaton fractured his neck while performing a stunt in Sherlock Jr., but he didn’t realize it until years later.

Writer-director Jordan Peele revealed that the single leather glove each Tethered person wore in Us was a nod to three key figures: O.J. Simpson, Freddy Krueger, and Michael Jackson.

In Thor: Ragnarok, the “He’s a friend from work!” line was actually improvised by a kid from Make-a-Wish who was visiting the set that day.

Lon Chaney, who played the title characters in The Hunchback of Notre Dame and The Phantom of the Opera, did his own makeup for the roles.

The Princess Diaries was actually produced by Whitney Houston.

In Home Alone, that picture of Buzz’s girlfriend was actually a picture of the art director’s son wearing a wig.

For Moonlight, Naomie Harris had only three days to shoot all of her scenes because of visa issues. Still, her performance was so good that she was nominated for an Academy Award.

In A Quiet Place, Millicent Simmonds made onscreen father John Krasinski cry with a simple suggestion to the script: signing “I have always loved you” instead of “I love you” before his character gets killed.

In Jurassic World: Fallen Kingdom, Chris Pratt had a full-circle moment because the movie (which earned him $10 million) was filmed in Maui, Hawaii, and just 20 years earlier he was living in Maui…in a van.

Henry Golding almost turned down the main role in Crazy Rich Asians because he thought it called for a “legitimate actor,” and that just wasn’t him.

In The Muppet Christmas Carol, Michael Caine insisted that the only way he’d play Scrooge was if he pretended like the Muppets were real people and that he was acting in the Royal Shakespeare Company.

Jason Statham almost drowned at the bottom of the Black Sea after a stunt went wrong while filming The Expendables 3.

In Hostel, writer-director Eli Roth came up with the premise for the film after discovering a Thai website where people can pay to torture and kill another human.

Tiffany Haddish turned down Jordan Peele’s offer to audition for Get Out because she refuses to be in scary movies.

In Avengers: Endgame, Tony Stark’s entire death scene was completely made up on the spot.

In Die Hard, Bruce Willis’s role was actually offered to 73-year-old Frank Sinatra first. Sinatra was contractually obligated to get first dibs because he starred in the film’s prequel in 1968.

While filming on location for The African Queen, everyone on the set (including Katharine Hepburn) got dysentery from drinking contaminated water…

…Well, everyone except Humphrey Bogart and director John Huston, simply because they drank nothing but scotch on set.

Stanley Kubrick destroyed almost all of his props and sets from 2001: A Space Odyssey because he didn’t want them to be used in any lesser science fiction films.

Megan Mullally was fired from her role in Finding Nemo for refusing to do her high-pitched Karen Walker voice from Will & Grace.

In Batman Returns, Michelle Pfeiffer literally had to be vacuum-sealed into her Catwoman costume, which made it very difficult to move and breathe.

Ralph Nelson, the producer-director for Lilies of the Field, had to use his house as collateral in order to get the movie made.

Additionally, Sidney Poitier gave up his usual salary in exchange for a percentage of the movie’s profits in order to make Lilies of the Field.

Jodi Benson recorded “Part of Your World” for The Little Mermaid in a dark, isolated sound booth to help produce a more lonely and intimate tone in her voice that Ariel would be feeling in the scene.

In Get Out, most of that iconic “Give me the keys, Rose!” scene was made up that day while shooting.

Judy Garland and Mickey Rooney were consistently forced to take “pep pills” and sleeping pills so they could work three days straight and then crash for a few hours before filming more scenes.

In Hocus Pocus, the main role of Max almost went to Leonardo DiCaprio, but he backed out to film two other movies.

In The 40-Year-Old Virgin, Steve Carell’s chest was waxed for the very first time, and he didn’t think it was going to hurt, so all of his reactions were genuine.

In Alfred Hitchcock’s The Birds, live birds were tied to Tippi Hedren and also thrown at her while filming that infamous attic scene.

Due to a miscommunication on the set of The Hateful Eight, Kurt Russell accidentally smashed a 140-year-old antique guitar instead of the prop.

A lot of Tiana’s personal quirks and physical features in The Princess and the Frog were actually based on Anika Noni Rose, who voiced and sang for her in the movie.

The Conquerer was filmed extremely close to nuclear testing grounds, but the government said it would be safe to shoot there. Years later, many of the cast and crew developed some type of cancer from radiation exposure.

Angela Lansbury recorded the song “Beauty and the Beast” in a single take, even after staying up all night on a flight.

In order to make The Nightmare Before Christmas, it took the 120-person crew an entire week to produce just one minute of stop-motion footage.

In Jingle all the Way, the whole premise of the movie was actually inspired by the Cabbage Patch Kids craze from the Christmas season of 1983, when parents were literally fighting at stores to get their children these dolls.

While filming Move Over Darling, James Garner picked up Doris Day from the ground and accidentally broke two of her ribs.

Steven Spielberg refused to collect a paycheck for Schindler’s List, saying it would have been “blood money” and that all profits should be returned to the Jewish community.

And finally, the Genie from Aladdin was literally created for Robin Williams. They even animated Williams as the character to help convince him to accept the role.