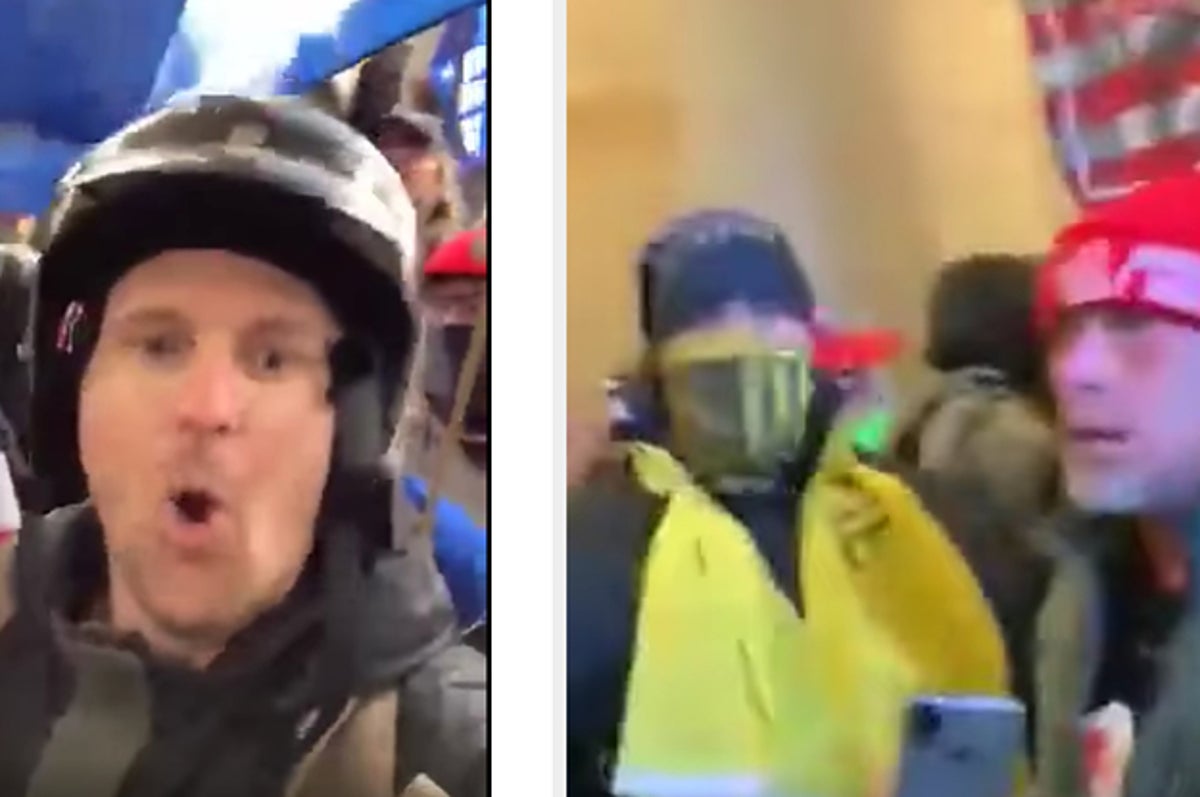 A West Virginia Republican lawmaker who live-streamed as he joined the large, violent insurrection of Trump supporters who stormed the US Capitol building on Wednesday said he was merely there as “an independent member of the media” and never took confronted authorities.

Derrick Evans, a newly-elected member of West Virginia’s house of delegates, was live-streaming on Facebook as he and other protesters muscled their way through the doors of one entrance carrying Trump flags and signs. Clad in a helmet and military-style gear, the Republican lawmaker cheered as those ahead of him ripped back the door as part of the attempted coup, in which one woman was shot and killed.

“We’re in, we’re in, we’re in, let’s go, keep it moving, baby!” he cheered as the wall of insurrectionists inched forward through the doors. Others can be heard yelling, “push! push!” as the group flooded past two Capitol police officers.

Evans later deleted the video from his Facebook page, but it was re-uploaded onto several other social media platforms.

In the video, Evans identified himself by shouting, “Derrick Evans is in the Capitol!” and turning the camera on his face several times. Once inside, the footage shows protesters taking over the main floor of the building, milling around, chanting, and taking pictures with statues.

At one point, the Republican told members of the group not to damage anything, stating, “this is our house and we respect it.”

In a statement posted on Facebook after the violence, Evans did not deny that he was part of the breach, but claimed he did not participate “in any destruction that may have occurred.” He also shirked his identity as a state legislator, instead saying he was “simply there as an independent member of the media.”

The 34-year-old, who was sworn into office last month, is part of a new wave of Trump loyalists who ran as Republicans but abhor the establishment and instead identify as members of a “patriot” movement. Across the US, they were elected to school boards, state legislators, and even Congress, where they have helped spread Trump’s baseless theories about election fraud and vowed to fight to keep him in office.

Throughout his campaign, Evans also shared false claims that thousands of dead people voted in the presidential election, decried the Black Lives Matter movement, and shared posts advocating for Trump supporters to bear arms. He is also a well-known anti-abortion activists whose harassing tactics forced a clinic worker to file a restraining order against him, which he reportedly violated.

According to his Facebook page, Evans helped organize two charter busses full of largely mask-less “patriots from WV, KY, and Ohio” that headed to Washington, DC, Tuesday evening. Before the attempted coup, the Republican had been live-streaming from the Capitol grounds, capturing small clusters of Trump supporters hanging around the small metal barricades and listening to speakers.

“I would love to see Nancy Pelosi come by,” he said toward the end of one video, to which a woman responded: “if she walked by someone would risk their life…they would just be done. They’d be more than happy to go to jail.”

“Oh I would agree, someone probably would,” he laughed.

In another livestream, he told viewers that it’s “going to get wild today guys” and repeated another baseless conspiracy theory that President-elect Joe Biden is a pedophile.

During one segment, he encouraged his followers to run for office, just like he did, crediting the president for his success and offering to help anyone who sent him a message.

“Trump has paved the way,” he said.

Evans’ participation in the Capitol storming drew strong rebukes from West Virginia leaders, including Republican House Speaker Roger Hanshaw. While he said he had not yet spoken to Evans, Hanshaw said in a statement that the new lawmaker “will need to answer to his constituents and colleagues regarding his involvement in what has occurred today.

“While free speech and peaceful protests are a core value of American society, storming government buildings and participating in a violent intentional disruption of one of our nation’s most fundamental political institutions is a crime that should be prosecuted to the fullest extent of the law.”