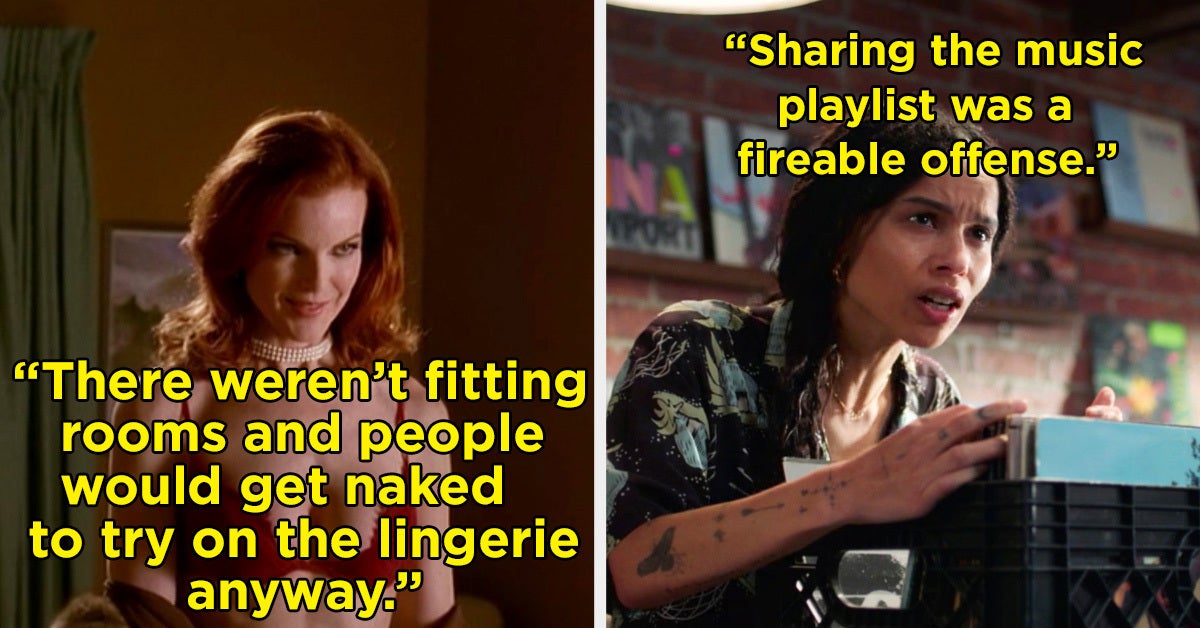 We recently asked former Spencer’s employees of the BuzzFeed Community to share their experiences about working at the, uh, “naughty” gift store. Here are some of the most interesting responses:

DISCLAIMER: Obviously, we can’t 100% confirm all of these stories, but these people are supposedly speaking from their own experiences as alleged former employees.

“I used to pierce people’s ears. My ‘training’ consisted of me shooting the piercing gun at a piece of paper with a dot on it once. I don’t even remember if I hit the dot. Then I was let loose to the public.”

“I once had a lady try and buy edible underwear with her EBT cards and she was outraged when I told her we don’t take food stamps even though, yeah, technically that G-string was made of candy.”

“Spencer’s sells lingerie, but has no fitting rooms. Add those two together and you get people often trying to get naked to try them on regardless.”

“I had a shoplifter who stole a blow-up doll and was caught in the Sears bathroom…enjoying said blow-up doll. Security brought him back to the store WITH THE BLOW-UP DOLL!”

“Sharing the music playlist was a fireable offense.”

“Spencer’s sold body jewelry, including nipple rings. Customers would often ask, ‘Would this fit my nipple?’ as they took their breast out for me to examine. My response would always be, ‘No need for that. These are all standard size.’”

“Customers returned and exchanged adult toys. Were they used? Sometimes. Was it gross? Sometimes. Most customers were embarrassed and stated, ‘It’s not working,’ and we exchanged it. My favorite was the one who said, ‘The toy isn’t pleasuring me the way I want to experience my orgasm.'”

“Lots of people made returns of the lingerie when it clearly smelled of cigarettes and booze.”

“As an employee, I was encouraged to get tattoos and piercings. By the time I left, I had 17 piercings and gained four more tattoos.”

“Spencer’s frequently sent ‘secret shoppers’ to your store to grade you on how you greet and treat the customer. If you didn’t greet the secret shopper within a certain amount of time or re-approach them on the sales floor, you were deducted points.”

“The strangest thing was we were required to fold and set up our T-shirt displays in a VERY specific way. When we would have our store visits from the district manager, we could get written up for not having folded and lined up our shirts correctly.”

“A young man once came in looking for an anatomically correct blow-up doll, with entry points in the right places. As I was showing him the options, he shared that he was purchasing a new one as his last one had ‘sprung a leak.'”

“I worked in a Spencer’s in a smaller city, and it was amazing the amount of ‘conservative’ and ‘good churchgoing’ people we would see buying the wildest things. I’m not one to judge, let your freak flag fly, but do not condemn me for openly flying mine.”

“At the end of your shift or when you went on break, you had to turn your pockets inside out and lift up pant legs to prove you didn’t have any merchandise on you when you left the store.”

“Most of my experiences were young teens buying something with their parents and the parents would shame me for working there.”

“I worked at a Spencer’s in California and the biggest thieves we had were middle-aged women trying to steal vibrators.”

“Our store was popular for television studios to send their assistants to and purchase hundreds of dollars worth of merchandise. The downfall? They would come back and return almost everything every time.”

“When a display item was ‘past its prime’ or someone returned something, it was supposed to go out to the trash and thrown in our compactor. Many things found their way into my trunk instead of the compactor.”

“We would occasionally get emailed a list of products that needed to be destroyed — so we would end up cutting up things like purses so no one could dumpster dive for them.”

Did you use to work at Spencer’s? If so, what are your secrets and horror stories? Let us know in the comments!