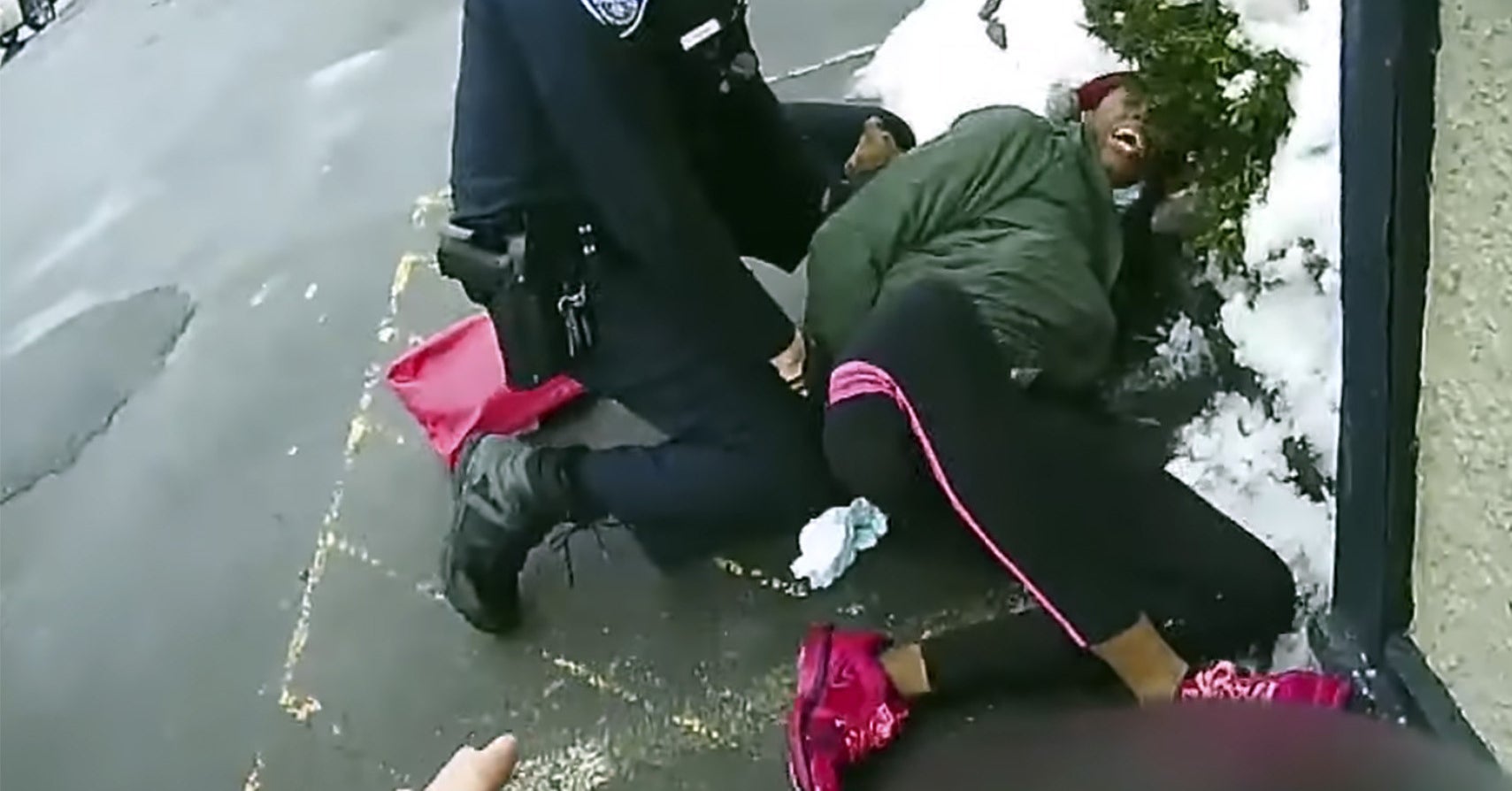 
Police tackled a Black woman they suspected of shoplifting while her 3-year-old watched, and then pepper-sprayed her in the face as she held her toddler, according to video footage of the Feb. 22 incident that officials released Friday.

The arrest took place in Rochester, New York after police responded to a report of an alleged shoplifter at a Rite Aid, the Rochester Democrat and Chronicle reported.

In body camera footage of the incident, a police officer can be heard interrogating the woman, asking her what she “stole from that store” and telling her “I don’t have time for BS, you better be quick with me.”

The woman denies having shoplifted anything, opening her purse and showing it to the officer, and pulling diapers and other items out as she says, “I didn’t steal nothing.”

The officer then tells her she needs to remain with him until they speak with the store employees, at which point the woman begins running away with her toddler. Police quickly catch up with her, and she is repeatedly heard saying, “I did not do anything!”

Police then aggressively tackle her to the ground to handcuff her, as her child can be heard screaming and crying “mommy, mommy.” The woman is heard telling the officers, “I did not steal anything!”

In security footage of the arrest, the woman is seen grabbing her child’s hand as she gets up, and an officer pepper-sprays her in the face and tries to push her onto the ground again as another officer separates her grip on her toddler.

“That chick was putting up a fight, holy smokes!” an officer can be heard saying immediately after the arrest. He then loudly argues with a bystander who filmed the incident, saying he wasn’t helping.

Body camera footage shows the child screaming in distress, and police holding the child back from running to the police car where the woman was being held.

The woman’s toddler was not hit with pepper spray during the arrest, police said in a statement. Police did not immediately respond to a request for comment from BuzzFeed News.

The officer in the incident has been placed on administrative duty pending an investigation, and the woman was charged with trespassing “as the store confirmed she knocked a number of items off of the shelf and refused repeated requests to leave,” Interim Police Chief Cynthia Herriott-Sullivan reportedly said.

Herriott-Sullivan suggested that police adhered to protocols, the Rochester Democrat and Chronicle reported, but added, “Just because we can do certain things, should we?”

“If the person’s physically resisting, generally you’re safe with pepper spray usages,” she said. “You only want to go to the extent that’s necessary. You don’t want to go beyond that.”

In a statement obtained by Rochester City News, Rochester Mayor Lovely Warren said the video of the incident was “disturbing.”

“When incidents like this occur, I am relieved that I ensured body-worn cameras are worn by our police, so that we can see what occurs on our streets and hold officers accountable,” Warren said.

In March 2020, a Black man named Daniel Prude was detained naked and handcuffed by Rochester police, who placed a hood over his head and pinned his face to the ground for two minutes. Prude died of asphyxiation, and his death only gained national attention after his family video released footage of the violent incident.