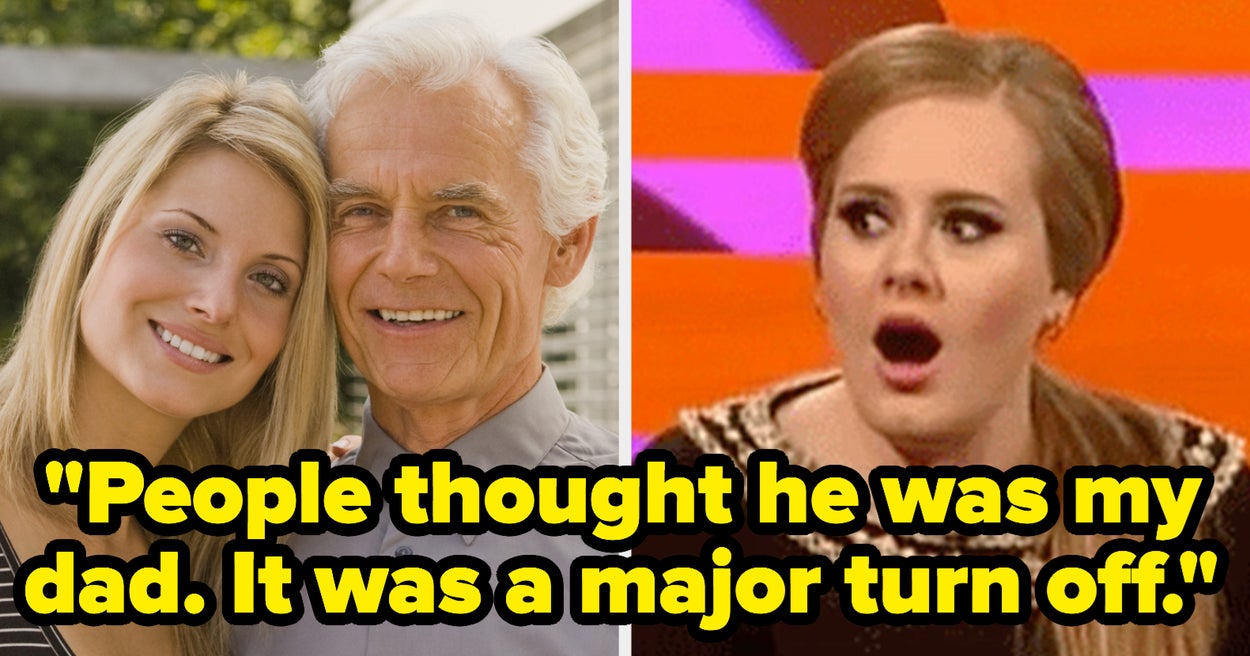 We recently asked people in the BuzzFeed Community to tell us what it’s like being with someone from a different generation, and their responses shed a lot of light on relationships with big age differences:

“Pros: Older and wiser really is true. It was nice to be with someone more centered, well read, and knowledgeable than guys my own age. I also liked that they were more polite, took me out for nice meals, and seemed more dedicated than the guys I dated before. Less fear of commitment, less jealousy.

Cons: People telling me to hurry up with having children because otherwise they’d have a really old dad — I wasn’t ready to have children at all. Also, people assuming I was shopping with my dad. It was big turn off for me. Lastly, judgment from others, ranging from family (they worried I was being taken advantage of) to exes to strangers. Feeling like you have to explain yourself and defend your relationship all the time.

However, I’m now in a serious relationship with someone my own age and I have to say I prefer it this way. It’s easier to relate and think about the future with someone who’s at the same point in life as I am.”

Honestly, it’s never caused much of an issue. It’s weird when my mom visits and they’re talking about shows that were on TV before I was born, but that’s about it. We like the same hobbies and want similar things out of life. The only downside, and it’s sad, is that we’ll never be one of those couples that is together 50 years.

Early on, I think I pushed us both to do things like move in sooner than we needed to because I felt like I was on a deadline. We got through it and I got over it. The last 10 years have been amazing and we have a beautiful life together. If this was all we had, I’d still be grateful. Nothing is guaranteed anyway, so if your partner is older than you, just live your life and don’t worry about what’s going to happen in a year. You might miss something wonderful.”

“My girlfriend and I had a 20-year difference.”

“The hardest thing is that you’re often at different stages in life, and aren’t always ready for things at the same time. My girlfriend and I wanted a child but I didn’t want to go through with that until my thirties. Unfortunately, in that timeline my girlfriend would have been in her fifties, which she wasn’t comfortable with. We broke up despite wanting the same things because the timing just wasn’t right.”

“I’ve always been more of an old soul, and guys my age have always been way too immature for me, and at least with my past boyfriends, their work ethic is garbage (meaning I end up having to pay all the bills). I’m not much into going out and it’s nice being with someone who is super content having a date night at home. We cook nice dinners, have drinks, and watch movies. I never thought I’d date older, but I am so happy I took the chance.

The worst part is we don’t always get each other’s references.”

“We’ve been together for a decade and have no problem with the age gap. Other people do/did, mostly at first, but we honestly forget about it 99% of the time.

“The biggest issue we faced was approval from his family. His kids did not approve, and it ended up ruining our relationship. Another issue was that he had a boomer mentality about a lot of things and didn’t quite understand the struggles that young adults face today, because things were so much simpler when he was that age. He also didn’t understand internet humor, so he didn’t usually get my little jokes. He was also done having kids, where I wanted one of my own.

“Overall, though, it was a completely normal, happy relationship. We had a lot of similar interests and values, and we truly enjoyed each other’s company.”

“We have two children together and a little bit of difference in parenting styles, but have great communication, so we’re able to come to a common ground. For example, he is more traditional and doesn’t like the idea of the kids having tablets, and I’m the opposite, being more modern.”

“The best thing about our age difference is that we both bring different perspectives to the table, and he has really great advice for when I go through a situation I’ve never been in before. However, sometimes my pop culture references or his ’80s movie references fall flat, but that’s a price I’m willing to pay.

I would say the funniest thing about our relationship is when people mistake him for my dad in public. You should see the horrible reactions we get, and the awful embarrassment people feel when we tell them he’s my boyfriend!”

“We have most things in common, a very similar taste in movies, music, etc. I think the oddest thing is talking about the differences in our teenage years. Also, he’s never seen SpongeBob.”

“The interesting reactions I get are when I introduce his children (from his first marriage) as my children. They are both older than me and find the shocked reactions hilarious too. Thankfully, they are very happy I am part of the family.”

“My husband and I have an 18-year difference.”

“People warned him about dating a younger woman, much less marrying one. We are still together, though, happily married after 23 years with two children. If it works for the two of you, it works. The others can go on their way.”

“I’ve never gotten along better with a partner. He’s established and mature, but he can also be incredibly goofy and we have a lot of fun.

He’s already been married and has children, so he got to experience a lot of ‘firsts’ that I haven’t had. He’s not excited to have another wedding and marriage.

Also, because he’s older, he’s more conservative and traditional than I am. We disagree on some social justice issues and how to handle them.”

“We discuss a lot of things from our different POVs, which helps to raise our 11-year-old with an open mindset. I do get scared of ending up a widow too soon, and not aging together, but that fear is nothing compared to the great memories we made each day and our wonderful daughter. I wouldn’t change our story ’cause we met exactly when we needed it, and have made a wonderful life together.”

“I’m in school right now trying to piece together my life and figure out what I want to do, and he helps me so much with that. He continues to reassure me that everything will work itself out, even when everything feels like it’s falling apart. We do have different music and movie tastes, but we are sort of like the same person from different generations and I just couldn’t be more grateful to have him in my life.”

“The biggest difference I’ve noticed is understanding cultural references, such as memes, different music, and movies. This is even more prevalent because he is from the Caribbean and I was born and grew up in the US. A millennial growing up in Virginia has a very different understanding and way of thinking about things than a Gen X’er who grew up on the streets of Jamaica. Despite all that, we are extremely compatible and have only expanded our own world views through learning from each other!”

“We get along fine, our only problem seems to be other people having a problem with our relationship, as if it affects them.”

“I’ve always been an old soul and he definitely has younger energy, so I always joke that we are both about 40.

I love learning of music, movies, and cultural references that he grew up with. I also love when an event from (for example the ’80s) comes up and I can ask him what it was like to live through that event. He makes me a really well-rounded person.

The worst thing for me is knowing that he will most likely die before me and I will have to live with that heartache. But what we’ve created together I would not change for anything in the world. We got married last month and plan to have a child together. Love of my life!”