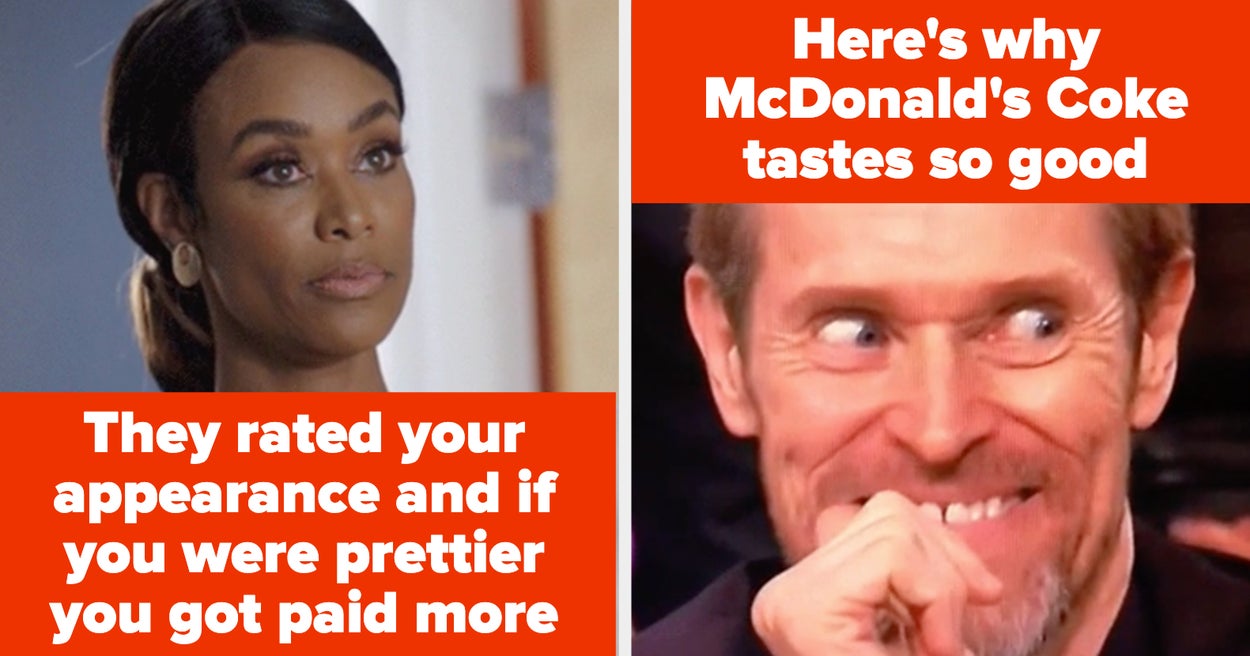 Recently, TikTok user @annaxjames asked people who used to work for large companies to share the secrets that only the employees know:

In the video, which has nearly a million views, she shared her own experience as a former employee of Hollister. She said that they used to hire two different type of employees: one would stock in the back and one would be the “model” who helped customers. During the interview process to be the “model” they would rate your appearance on a scale of 1-10.

If that wasn’t messed up enough, she also shared that the company would pick the skinniest, prettiest girl to work in the front of the store on Black Friday — and that girl would get paid more.

More former employees of big corporations — like user @evilglitterqueen who used to work at McDonald’s — started sharing secrets they learned on the job:

While working at McDonald’s, he learned how much strategy goes into everything they sell. McDonald’s straws are larger than regular straws because it allows more carbonation to hit your tongue, tricking you into thinking their soda tastes better. In addition, the syrup in their Coca Cola has more sugar.

He also shared that McDonald’s grilled chicken is injected with a salt and water mixture to keep it moist and flavorful. Their ice cream machine is made from whole whipping cream and it’s cleaned once a week. And, Tyson makes their chicken nuggets, which are privately labeled.

User @lizzymwong used to work at Target and she shared a very useful money-saving hack:

She explained that Target prices matches all of their competitors, including Walmart and Amazon. All you have to do is go to guest services, show them proof, and they will change the price for you.

Her pro tip is pretty genius. She said that when Target sells Apple products with a $100 gift card, buy them because you can still price match and get the gift card as well.

TikToker @yungpepee used to be a cashier at Marshall’s and she revealed how they don’t do anything if you shoplift:

She told a story about how a customer reported seeing another customer steal a whole bunch of makeup, but — as an employee — she couldn’t do anything about it.

She explained that employees at stores like Marshall’s, HomeGoods, TJ Maxx, Sierra Trading Post are legally not allowed to accuse customers of stealing. The reasoning for this is that you could be putting the rest of the store at danger by confronting a shoplifter.

At Kohl’s, employees are trained to follow a “Yes You Can” policy, meaning that if a customer is fighting for a discount less than 50% off the original price of an item, they are supposed to just give it to them. So, if you are wanting 49% off a full-price item, the cashier should give it to you without calling a manager.

After working at Best Buy for nearly a decade, TikToker user @chubbyelvis shared some things he learned:

He said not to buy Best Buy’s protection plan because, if you need to take an item back a year after you purchase it, they can return it and give you a gift card for the purchase price. If they tell you they can’t honor a manufacturer warranty, they can, you just have to ask for a manager.

He also revealed that buying a cell phone at Best Buy is way more expensive than buying it at a carrier store, like T-Mobile. If you’re looking to get a deal on a high-priced item by buying an open-box, go on a Saturday night because that is when employees are trying to hit their numbers.

Also, never buy an HDMI cable from Best Buy because apparently they are always over-priced. Lastly, he said Best Buy loses money on computer sales, so when they offer a “bundle deal” it’s actually not that great of a deal!!!

Did you used to work at a large corporation?! What is something you learned that most people don’t know? Tell us in the comments!