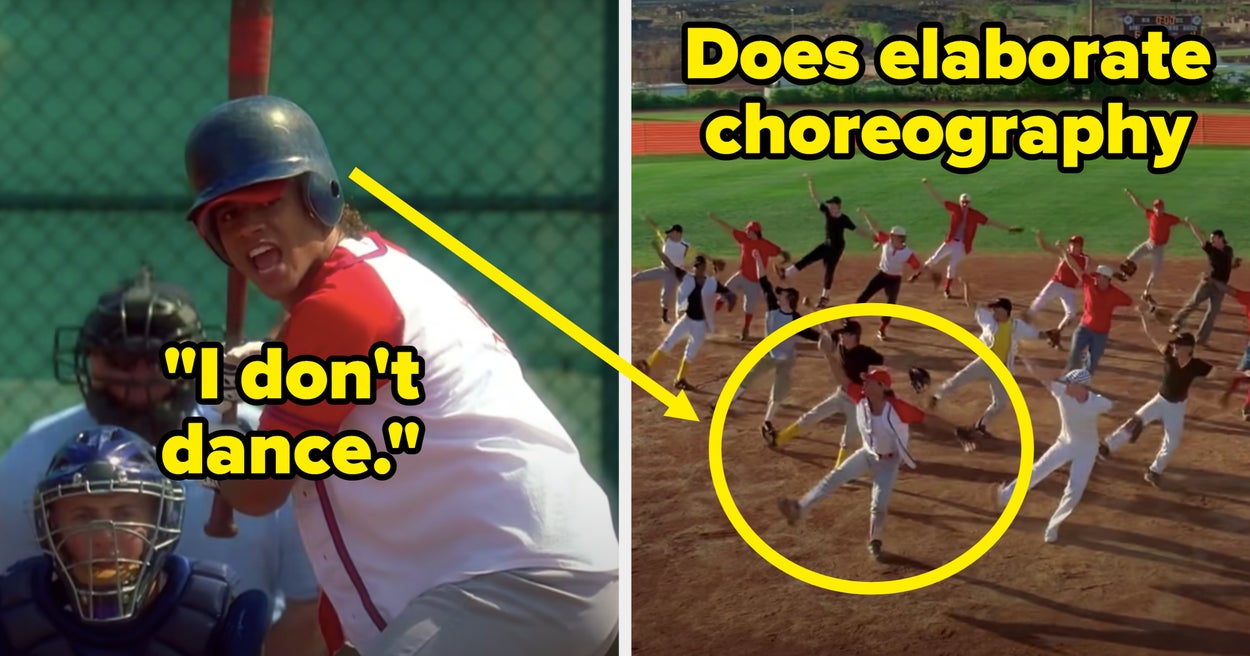 We recently asked the BuzzFeed Community to tell us a moment from a movie they loved when they were younger that doesn’t make any sense to them now. Here are the fascinating responses.

“In Home Alone, Kevin’s mom calls the police and tells them her young son is at home alone, but when the police go to the house and Kevin doesn’t answer their knocks, they LEAVE.”

“How does Pocahontas’s hair stay so perfect in a wind sprial?!”

“That High School Musical 2 scene where Chad says he doesn’t dance…and does a full choreographed number about it.”

Also Chad just, like, always carries around a basketball at school in High School Musical, and he never has any school stuff.

“In What A Girl Wants, how do Daphne’s father and her love interest just magically appear at the wedding party? How do they find her?”

“If Cinderella’s shoes fit so well, shouldn’t they not fall off?”

“Also in Cinderella, why does the fairy godmother only give Cinderella a pretty dress and shoes? Why doesn’t she do something more useful like adopting her or finding her a better place to live?”

“In Jurassic Park, why doesn’t Tim just hand the gun to Dr. Sattler or Dr. Grant in the control room when the dinosaur is trying to push through the door?”

“The parents in The Parent Trap! Who would agree to never seeing their child again? It doesn’t make any sense!”

In Pitch Perfect, why does Beca feel comfortable auditioning for The Barden Bellas after Chloe, like, invades her shower? That should be a dealbreaker.

“When the real Sebastian comes in She’s the Man, no one notices that Sebastian is suddenly taller and much more muscular — and just so bloody different.”

“The ‘Bend and Snap’ scene in Legally Blonde ruins an otherwise flawless film. It doesn’t translate into real life and, other than being a device to break the UPS guy’s nose, it serves NO purpose.”

In Kim Possible: A Sitch In Time, Ron is looking at a picture from kindergarten when it changes, because Drakken and co. have gone to the past. That means the change has now happened in Ron’s timeline, so how does he remember what used to be?

Why don’t they rush to the hospital in Hitch when his face swells to the nth degree because of an allergic reaction?

“In The Lizzie McGuire Movie, Lizzie is pretending to be Isabella on stage when Isabella tells the guy in charge of the soundboard to ‘turn down Isabella’s mic’…and nobody questions this.”

“Also in The Lizzie McGuire Movie, the teacher just springs on Lizzie that she’s going to make a speech at graduation seconds before she has to.”

“In Descendants, why are the still young and fit King and Queen of Auradon giving the throne to their teenage son who hasn’t even graduated yet? Why are they abdicating at all?”

“In The Little Mermaid, why doesn’t Ariel just write on a piece of paper or something explaining to Eric that she’s lost her voice? She obviously knows how to write, she signed Ursula’s contract.”

And, “At the end of Hannah Montana: The Movie, Miley shares her pop star secret to a WHOLE CONCERT of people and then is like, ‘Don’t tell anyone.’ There’s no way everyone at that concert would agree to keep Miley’s identity a secret.”

Note: Not all submissions are from Community users, and those that are have been edited for length and clarity.