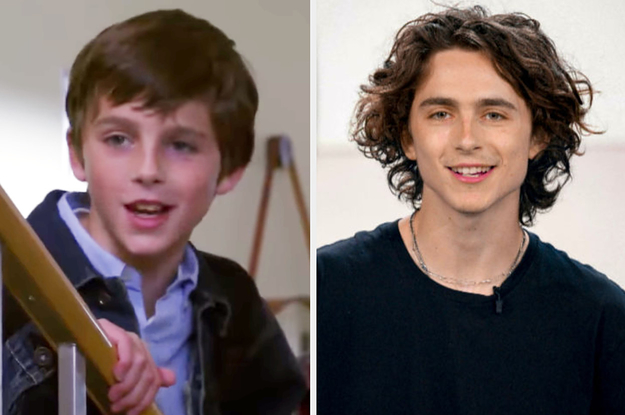 Way before Timothée Chalamet was winning hearts on the silver screen, he popped his TV cherry on Law and Order.

Jennifer Aniston played a charming hospital volunteer in an episode of the sci-fi show Quantum Leap.

Long before she won any Academy Awards, Jennifer Lawrence played a girl whose mum was shot dead in Cold Case.

We all know that Ryan Gosling was a Disney kid, but he was also in an episode of Goosebumps.

Pre Step-Up Channing Tatum rocked this look in an epsiode of CSI: Miami.

Before she was Annaliese Keating, Viola Davis was also in an episode of one of CSI‘s many iterations.

Lady Gaga played a girl who led Tony’s son astray in The Sopranos.

Way before he was The Lord of Hell in Lucifer, Tom Ellis was Albert Square’s resident GP on Eastenders.

Olivia Colman had a tiny role in the original version of The Office.

Like many other Canadian stars, Shay Mitchell made a lil’ appearance in one episode of Degrassi: The Next Generation.

A fresh-faced Brie Larson was in one episode of Ghost Whisperer.

Lil’ Leonardo DiCaprio had one uncredited role in Roseanne.

Way before Get Out, Daniel Kaluuya was in an Easter special of Doctor Who.

And Rami Malek made his onscreen debut down in Stars Hollow on Gilmore Girls.

In the early days of her thriving career, Amy Adams had a guest spot in one episode of Charmed.

Aubrey Plaza played an NBC Page in 30 Rock not long after leaving the Page Program back in 2006.

Brad Pitt was in four episodes of Dallas back in the day.

Tiffany Haddish had a little part in the Disney classic That’s So Raven.

One of Rooney Mara’s first acting roles was in ER, as a woman who abandoned her baby.

Long before she was kicking ass, Chloë Grace Moretz was in two episodes of Desperate Housewives.

James McAvoy’s first TV role was as a fiesty teenager on The Bill.

Before he was being a creep in YOU, Penn Badgley played a bully in Will And Grace.

And finally, before his silver fox days, George Clooney had a bit part as a detective in an episode of The Golden Girls.

Whose bit part do you remember? Let us know in the comments!