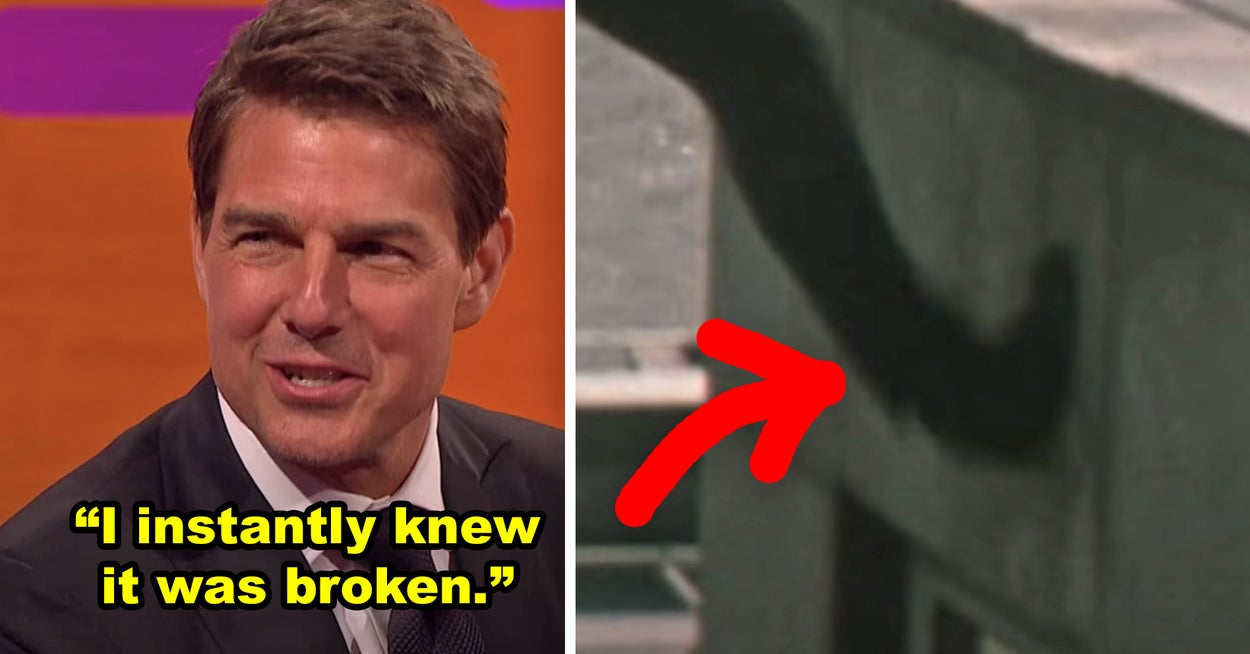 We asked the BuzzFeed Community to tell us which celebrity on-set injury stories have stuck with them the most. Here are the wild results.

Tom Cruise broke his ankle while leaping from one building to the next in Mission Impossible 6, and during that same shot he continued to run on it to finish the stunt.

Ellen Burstyn permanently injured her spine after being purposefully slammed into the ground twice while shooting a particular scene in The Exorcist.

Sean Astin accidentally cut his foot open on a shard of glass that was sticking out of the water while filming a scene in Lord of the Rings: The Fellowship of the Ring.

Jason Statham almost drowned at the bottom of the Black Sea because the brakes on his truck stopped working while filming a stunt in The Expendables 3.

And Betty Danko, Margaret Hamilton’s stunt double in The Wizard of Oz, spent 11 days in the hospital after a pipe in the character’s broomstick exploded.

Halle Berry broke her foot while chasing her daughter (who was chasing a goat) on her day off from shooting Cloud Atlas.

Buster Keaton fractured his neck while performing a stunt in Sherlock Jr., but he didn’t realize it until years later.

In Alfred Hitchcock’s The Birds, live birds were tied to Tippi Hedren and also thrown at her while filming that infamous attic scene, and she got severely pecked all over her body.

Jeremy Renner fell about 20 feet while shooting a scene in the comedy Tag, and he broke both of his arms.

Sylvester Stallone wanted to make sure the boxing scenes looked so real in Rocky IV that he instructed Dolph Lundgren to actually hit him. After getting hit in the chest, Stallone had to stay in the ICU for nine days.

Bette Davis and Joan Crawford hated each other so much while filming What Ever Happened to Baby Jane? that during the “fight” scene, Davis kicked Crawford so hard that she actually needed stitches.

And Joan Crawford retaliated by putting weights in her own pockets before shooting a scene in which Davis had to carry her. This caused Davis to strain her back.

In Now You See Me, Isla Fisher almost drowned in front of the entire cast and crew while filming a scene in which her character was supposed to perform an underwater magic trick.

Buddy Ebsen was the original Tin Man in The Wizard of Oz, but the aluminum dust from the makeup nearly killed him, so he was replaced by Jack Haley.

Silent film star Harold Lloyd was doing a publicity shoot on the set of Haunted Spooks when a prop bomb (which turned out to be a real bomb) went off, instantly removing his thumb and index finger.

David Holmes, Daniel Radcliffe’s stunt double for the Harry Potter movies, was paralyzed while testing a stunt for the seventh movie.

While filming Move Over Darling, James Garner picked up Doris Day from the ground and accidentally broke two of her ribs.

And Jackie Chan has broken pretty much every single body part — and he even got a hole in his head — throughout his entire career as an action star.