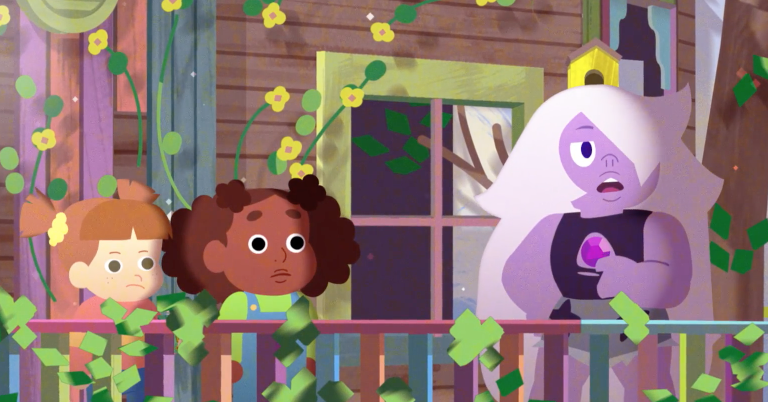 In December of last year, Cartoon Network put out an anti-racism PSA that went viral and garnered a lot of praise online.

In the spot, Pearl, one of the mighty Crystal Gems from Steven Universe, interrupts an American history class to point out that our textbooks are incomplete retellings of history that prioritize white accomplishments and promote systemic racism.

Cartoon Network’s latest PSA, called “See Color,” takes place on the set of a PSA — how meta — this time with Amethyst, another Crystal Gem from outer space on Steven Universe.

The cast begins to sing along with the lyrics of the spot — “Everybody join our circle, doesn’t matter if you’re white, Black, or purple” — until Amethyst interrupts.

The two children featured in this ad immediately chime in with agreement about the message being off.

Amethyst continued, “I just think it’s messed up to compare me being an alien to you two being different races. You’re both human, you’re totally biologically the same. Adding purple people into a lesson about human racism makes no sense.”

The Black actor on the set then speaks up to say that her experience with anti-Black racism is very specific. She continues, “Other people of color experience other forms of racism too. But you won’t see any of that if you ‘don’t see color.'”

Amethyst then questions whether the whole idea of their PSA “could be a ploy to avoid talking about racism altogether,” and everyone agrees to try a new PSA with a completely different message.

You can watch the whole video below and see more of Cartoon Network and Steven Universe‘s anti-racism PSA campaign on their website.