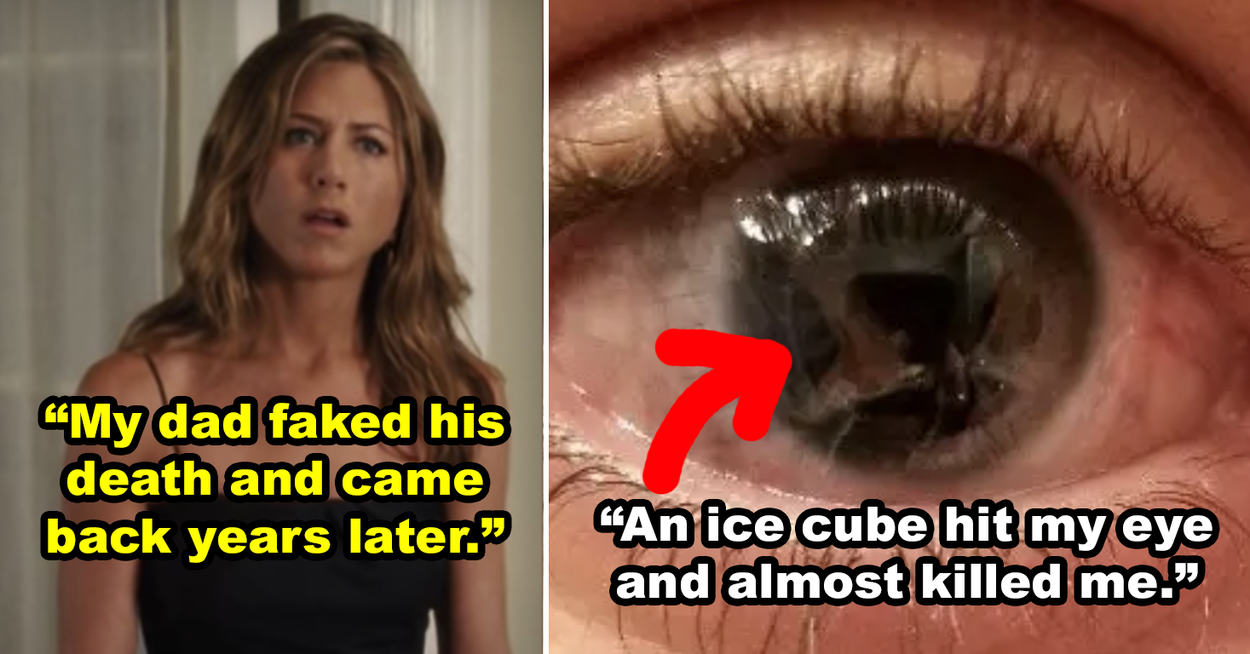 We asked the BuzzFeed Community to tell us their real-life “one in a million” experiences, and they’re genuinely jaw-dropping. Here are the wild results.

“When I was a kid, my dad faked his own death. We spent years thinking he was dead until he reached out with his new name and identity like nothing had happened…”

“In 2019, I was especially overwhelmed with my job and with life in general. We had over $25,000 in outstanding medical bills for my son, so quitting was not an option. On a whim, I bought a lottery ticket but forgot about it and accidentally threw it away in the bag it was in. Two nights later, I saw on the news that someone had won a large Powerball prize at the grocery store where I purchased the ticket from, but the winner had not yet come forward…”

“When I was 15, I lost my vision in my right eye and almost died, all due to a FREAKING ICE CUBE. I was getting ice for my drink and cracked the tray. One of the ice cubes came shooting full speed toward my open eye, which popped like a gooey, blood-filled water balloon. I was rushed to the ER and got 67 stitches to repair what was left of my pupil and iris. They said if the ice had lodged just one centimeter deeper, I would’ve died on the spot…”

“I developed a great working relationship with one of my employees. After two years of working together, we started talking about our parents. It turned out that the name on their dad’s birth certificate was the same name as my dad’s. I called my dad, and he confirmed that he once dated my employee’s mom! He was unaware that she had gotten pregnant, so it was a shock to all of us. It was then when I noticed all of the similarities between my employee and dad. That person is now an integral part of our family.”

“When I was 12, I woke up around midnight and decided to get a drink. When I came back, I noticed that my stuffed elephant had been moved. I freaked out and looked for intruders and didn’t see anyone, but I heard voices on our street before going back to bed. The next morning, I woke up to about 10 police officers standing on the pavement outside my room. My neighbor had been murdered…”

“My great grandma did some spy-type stuff for an Indian underground movement in the 1930s. She was a low-level civil servant, so the British let her keep her job (which is pretty badass for a woman in the ’30s in itself). Most of the British officers didn’t think she was smart enough to understand their conversations, so she was able to listen in on important conversations and copy down important documents…”

“I got rear-ended in January 2013. The car that hit me didn’t stop but there was no damage to my car when I got out to look, so I didn’t think much of it. Eight months later I was telling my new boyfriend about it and he asked me where it happened. It turned out that HE was the driver who hit me…”

“I was brought home from the hospital in a baby blanket that a murderer gave my mom. She was about 7 months pregnant with me and was looking for baby supplies at garage sales. The man noticed she was pregnant, invited her inside for lemonade and a snack, and gave her his daughter’s baby blanket. Soon after, we found out that he had been arrested, convicted, and imprisoned for murdering his wife and his mistress’s husband.”

“I have a rare genetic blood disease called congenital spherocytic anemia. About one in a million people in the general population have it. Unrelated, I also have a 1 in 5 million genetic mutation that has resulted in me having a completely functioning third kidney. I have also been struck by lightning while driving in my car. I don’t know if this makes me a very lucky or unlucky person.”

“I’m the same age as JonBenét Ramsey. That family was getting ready to go on vacation when she was killed. That vacation was a Disney Cruise called “The Big Red Boat.” How do I know this? Because my family and I were also going on that same cruise. The Ramsey family obviously didn’t end up making it on the boat so my family was upgraded to their suite…”

“In 2012, I randomly met a woman in an elevator at the MGM Grand in Las Vegas. We were staying only two floors apart. That woman is now my wife. It was the luckiest day of my life, and we’ve been together ever since.”

“Years ago I found a random woman’s journal at Goodwill. I searched for her online and found her son. When I gave him the journal, he said that his mom had passed away a few months earlier and the journal was accidentally donated. A year after that, I was in the same Goodwill and found his father’s journal.”

“I was working as an investigator and was searching for someone related to my case. I tried dialing the number I obtained in an interview, but I accidentally misdialed and called a random number. The population of the city in which I was working was about 3 million people, but somehow the person who answered my wrong number call happened to know my subject and his location.”

“Years ago, I was driving home from my then-boyfriend’s house and accidentally hit a black cat that ran in front of my car. I didn’t know what to do (I was 16), started to panic, and drove home while sobbing. I was so sad and ashamed that I never admitted it to anyone. Several years later, I was on a blind date and somehow we started talking about pets passing away. He said something like, ‘At least your cat wasn’t run over right in front of your house…'”

“I was on a service trip to Nicaragua in college and struck up a conversation with the random person who was sitting next to me on the bus. While exchanging pleasantries, we got to the topic of where we were from. I told her my hometown, and she said that she actually lived there for a year when she was in third grade. After narrowing things down even further, we eventually figured out that we were in the same third-grade class. We hadn’t seen each other in 13 years, but we somehow ended up sitting next to each other on a bus, thousands of miles away from home.”

And finally, “My childhood home blew up with dad still inside…and he survived.”