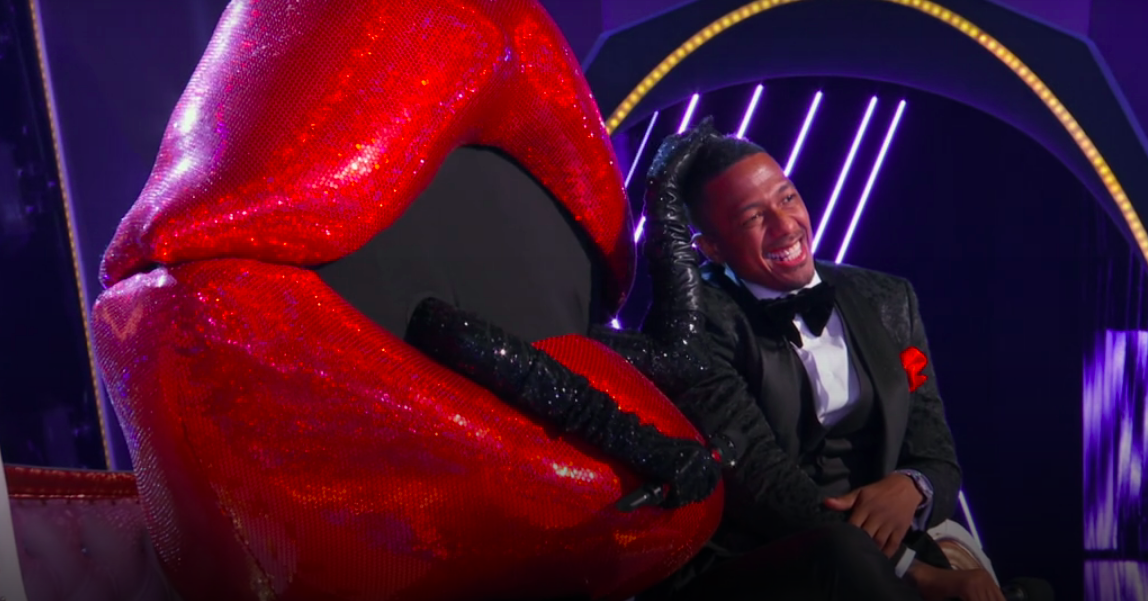 When I texted a friend and my monosyllabic ex-boyfriend to say that I was watching The Masked Singer for work, they both texted back, ”I’m not watching that.”

It was as if I was going to contaminate them with bad taste just by mentioning the show. And the thing is: I get it. The idea of C-list celebrities hiding behind mouse and kitten costumes competing against each other until they’re voted off and reveal their identities sounds dumb and calculated. And with Nick Cannon as host-ringleader in a rotating cast of sparkly capes, shoes, and turbans?

I, too, groaned, as the show gained more and more traction since its debut early last year, consistently scoring No. 1 ratings. Every time an especially random unmasking made news — like Sarah Palin rapping “Baby Got Back” in a Lisa Frank bear costume — it seemed so desperately designed for virality. Even Wendy Williams’ turn as a pair of singing lips in the midst of her public turmoil broke through the postelection social media clutter.

But it turns out the show is more than the sum of those viral moments. The contestants include music stars (including from country and opera) looking for a career reset or bigger audience, former athletes looking to have fun (especially rhythmless and tuneless white ones), and social media stars who are trying to stretch themselves into singing. (Although, in the case of some, like YouTuber JoJo Siwa, singing is a generous term for what happens onstage.)

These contestants aren’t just wearing masks — they are fully costumed and hiding behind carefully crafted personae that range from a baby alien to, in the most recent season, a couple of plumed snow owls wheeled around in a cracked egg. They cover songs in every genre — rap, country, ’80s power ballads — which are accompanied by stunning stage design and (sometimes) choreography.

The audience, along with judges, Robin Thicke, Nicole Scherzinger, Ken Jeong, and Jenny McCarthy, vote on who gets to stay every week and who wins the Golden Mask. But the judges aren’t really guiding viewers about the performances so much as engaging them in a guessing game of the true identity of these masked singers. And the show’s mishmash of musical talent show meets guessing game somehow encapsulates the absurdity of 2020 celebrity culture.

Big, monocultural reality competition hits usually work by showcasing real people plucked from obscurity into stardom. This was the model that powered behemoths like American Idol and America’s Got Talent to be number one in their heyday. (Idol even aired multiple days a week at one point, and shocking eliminations used to make as much news as these unmaskings.)

But The Masked Singer, imported from South Korea, is part of the more meta reality genre where celebrities — who may or may not be actually famous — attempt to prove their skills at an unexpected talent, like business acumen (Celebrity Apprentice) or dancing (Dancing With the Stars).

The difference is Singer makes the randomness of the celebrities part of the show. In little animated vignettes before their performances, the celebs reveal things about their career and struggles through the metaphor of their characters. This plants clues for the judges to guess their identities and helps the audience root for them, since they vote on who gets to stay.

Some arcs for these masked singers are more dramatic and endearing than others. A unicorn (with a pretty good voice) and a lion (with a great voice) who spoke about their difficulties as children of successful celebrity parents were revealed to be (not-that-surprising) reality television staples Tori Spelling and Rumer Willis (who had already won Dancing With the Stars).

Clearly, some celebs are just there to surprise viewers — and go viral — with the “didn’t have this on my bingo card” randomness of their performances. Celebrity Rehab host Dr. Drew doing a Meat Loaf power ballad dressed in an eagle costume was one of them, and so was rocker (and reality TV regular) Bret Michaels popping out of a banana costume to preach positivity.

Some celebs are just there to surprise viewers — and go viral — with the “didn’t have this on my bingo card” randomness of their performances.

Michaels was quickly exposed by guest judge Sharon Osbourne, who recognized the length of his legs. The judges are less the Simon Cowell–esque “music critics” of the Idol era and more like the obsessive detectives of next-gen celebrity podcasts like Who? Weekly or Las Culturistas. During the show, they consider celebrities’ casting histories, musical collaborations, and extracurricular activities (like Patti LaBelle’s pie brand) in determining who is behind the mask.

Jenny McCarthy, the model, anti-vax activist and former View cohost now rebranded as “pop culture expert” on the show, is the most impressive connect-the-dots judge in terms of marshaling recondite celebrity connections and clues into correct guesses. She has an encyclopedic knowledge of boy bander voices (thanks to her husband, Donnie Wahlberg) and a penchant for earnestly exclaiming “this is what makes the show great” every time literally anything happens.

The Pussycat Dolls lead singer and reality host Nicole Scherzinger spends her time calmly (and humblebraggily) explaining why some star friend’s schedule means she’s not behind the mask. She also dances and sings along with the contestants like she should really be the one onstage. (And she should be. When Seal paid homage to her hit “Don’t Cha” dressed as a queer panther, it finally felt like #Justice4SoloNicole.)

Comedian Ken Jeong’s shtick, meanwhile, is coming up with ridiculous, often A-list choices like Natalie Portman, who would never be on the show, as his guesses. His obsession with the show JAG did mean he ended up being the only judge to get a random onetime JAG guest star unveiling right.

And on the show, Robin Thicke is no longer playing the headline-making MTV provocateur (not that his rebrand as “romantic husband” worked). With his bad puns, earnest guesses, quarantine hair, floral shirts, and endearingly gigglish laughter, he has instead effortlessly segued into America’s daddy. Maybe it’s just me, but when he correctly guessed Ricki Lake was behind a crow costume because he grew up watching her talk show and he recognized the way she puts her hand on her heart, I thought: This is what television is for.

Comedians are brought in to revel in the show’s manic energy and sit with the panel. Recurring guest judge Joel McHale dressed up as “Blurred Lines”-era Thicke in one episode (accurately reproducing his penchant for open-necked white shirt cleavage) and succinctly captured the vibe with: “This is the weirdest show on television.”

While The Masked Singer is designed around the guess-the-celebrity concept, the ultimate attraction with this show is the talents of the stars. And hiding the identities with the costumes and personae gets the audience to root for the quality of the dancing and singing, as if celebs are “real people” underdogs.

The biggest surprise from the first season, for example, was the winner: a huggable one-eyed monster who sang everything from Montell Jordan’s “This Is How We Do It” to Sam Smith’s “Stay With Me.” It was (spoiler alert) rapper and singer T-Pain who later explained he purposely went on the show to emphasize his vocal talent given his fame as an autotune popularizer.

But T-Pain was arguably too recently famous to really capture the sense of vindication or “whatever happened to them” energy of more recent contestants and winners. The most compelling trajectories are from performers looking to reinvent themselves or to get the public to think of them outside the baggage of their celebrity past, like the finalists of the last two seasons.

Anyone who watched Season 5 of American Idol would recognize Chris Daughtry, the distinctive voice of the dog in baggy jeans who ended up as runner-up last December. He spoke about finding fame in an unconventional way and feeling boxed in by his image, and showed real vulnerability about coming on Masked Singer to overcome a period of artistic doldrums. It was a rare moment in reality TV where someone actually talked about their work so candidly.

The last season also featured the most exciting showdown so far by pitting two artists with a history who never really got their big solo moment. The voice of the ultimate winner, Kandi Burruss, the Night Angel, was easily clocked by any watcher of Real Housewives of Atlanta. The former Xscape member and songwriter had turned to the behind the scenes of the music business when her solo career didn’t take off like she’d hoped. Here it seemed like she was looking for vindication.

She faced off against a turtle in leather pants with impeccable vocals who sang everything from a haunting rendition of “Kiss From a Rose,” (surrounded by a striking set of roses) to Steve Winwood’s “Higher Love.” It turned out to be onetime teen star Jesse McCartney, who spoke about how much Thicke’s first album meant to him and what winning would symbolize since he always seemed to come up short. The stakes felt equally high.

Burruss ultimately won the face-off. After his unmasking, McCartney had a sweet moment with Thicke. “It’s been an honor and a pleasure to play for you, my man,” he said to Thicke, who responded: “I love you too, brother.” It didn’t really go viral, but no other show on television could vindicate Burruss and capture the randomness of that white soul bromance.

A lot of reality television — like The Surreal Life — works because it understands that viewers have an appetite not just for the obvious winners of the celebrity economy, but those who didn’t quite make it, or made it in their own way. So much millennial cultural content is about seemingly niche celebrity obsessions — with whatever happened to this or that person, or the influence of Glitter or Showgirls — that are actually shared across generational divides. The Masked Singer is a rare monocultural-sized show that finally gets this. ●