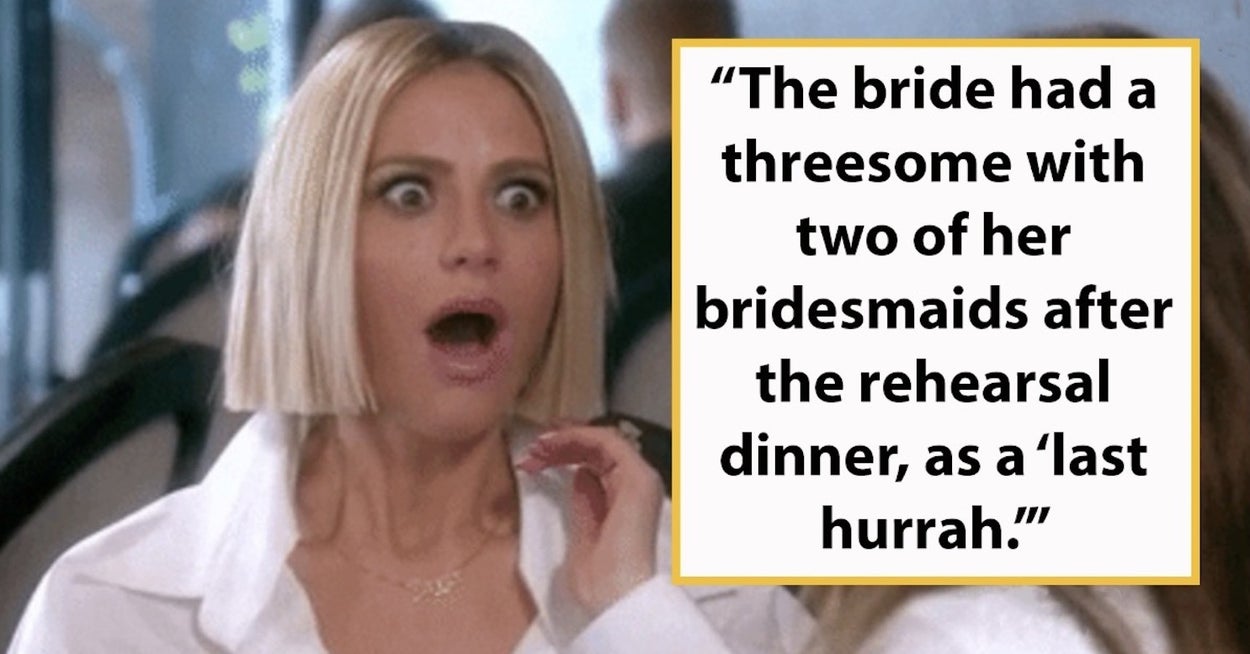 We recently shared a Reddit post in which wedding professionals shared the time they knew a marriage wasn’t going to last, and it was all things cringeworthy, awkward, and seriously, seriously jaw-dropping:

Well, our readers chimed in with wedding stories that made them think a couple wouldn’t last, and these are just as uncomfortable and jaw-dropping:

“The ceremony the next day was…awkward.”

“At a wedding I attended, the bride showed up an hour late, hammered, and hop-danced her way down the aisle.”

“Then, the unity candle accidentally blew out during the ceremony, and she giggled and yelled back to the room, ‘That’s not a good sign!'”

“I went to a wedding as a ‘plus one’ with my gay male friend. Well, when the pastor asked if anyone had any reason the couple shouldn’t be married, my friend leaned over and whispered to me, ‘Does doing the groom in the coat closet earlier count?'”

“I should have known it wasn’t gonna last when my new husband added ‘Dedication to My Ex’ to our reception playlist.”

“I knew it wasn’t going to last when after the groom said ‘I do,’ he asked the bride if she was going to stop ‘breaking his balls’ now.”

“I worked in a hotel bar, and once stumbled upon a wedding reception that had police lights outside. Turns out, the bride had gotten caught having sex with the best man in the bathroom right after the wedding breakfast, which caused a huge fight that spilled out onto the road.”

“I was a groomsman in a wedding where the mother-in-law and grandmother-in-law showed up in black dresses and black veils.”

“And at the reception, the grandmother loudly said that marrying a teacher who makes pennies is beneath their family. It lasted about a year, and he got stuck with massive credit card debt on cards he didn’t know she had.”

“I was at a former friend’s wedding when the bride — who had been a complete bridezilla about every little detail — started yelling at a server about something minor. Well, her brand-new husband turned to her and said, ‘Why are you being such a bitch?!’ and she responded by slapping him in the face. On their wedding day.”

“He was in the Army and deployed a few months later, and he was convinced she was going to cheat on him, so he asked her to get his name tattooed right above her vagina. In the end, they were married for a few years and had a kid, before she found out that HE had been cheating on her since they started dating.”

“I went to a wedding once where the bride got her own room for the wedding night because she was ‘too tired to share a bed.'”

“One of my friends’ girlfriends used to work at a bridal shop, and once she was fitting a bride’s dress when she overheard the bride telling her best friend she was waiting for a decision from her ex — she was going to dump her fiancé if he wanted her back, and go through with the wedding if he didn’t…”

“The girlfriend learned months later that they got their marriage annulled after the bride’s best friend got drunk at the wedding and told the groom everything.”

“I attended a wedding where all night long, the bride and groom were on opposite sides of the room. They broke up before the wedding pictures were ready to collect.”

“I was invited to a wedding that took place in Israel — the bride and groom had disagreed about the location because the bride came from a lot of money, but the groom’s family wasn’t as financially well-off, and he knew most of his family and friends couldn’t afford to fly there…”

“I knew it wasn’t going to last when immediately after the cake cutting, the groom disappeared…for the rest of the night.”

“I was at a wedding in which the bride got so sloshed that she fell down a few stairs, laughed until she starting sobbing uncontrollably, then threw up on her dress.”

“They lasted maybe two or three years, before her husband found her in bed with her married coworker.”

“I knew my friend’s marriage wasn’t going to last right before her wedding, when I asked her what she wanted to do with her last few minutes as a single woman…and she burst into tears!”

“I once officiated a wedding in which the bride started her vows with, ‘When I first met you, I really hated you.'”

“I went to a wedding where the mother of the groom said in her speech, ‘What can I say about Amy? I got nothing!‘”

Now that we’ve heard about the cringiest wedding moments, let’s hear about the touching, memorable wedding moment where you knew the couple was going to last forever. Tell us about it in the comments section, and you could be featured in an upcoming BuzzFeed Community post!