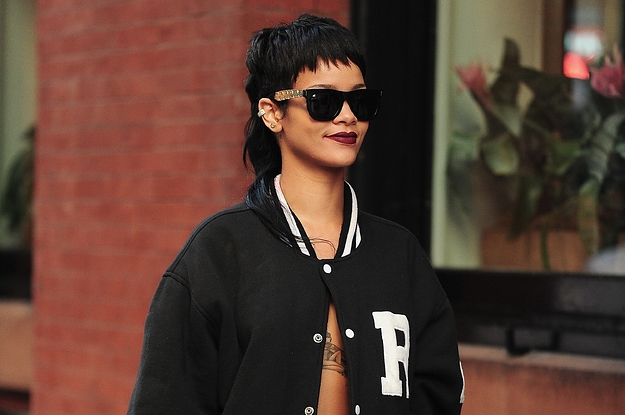 Throughout the history of hair, the mullet has always been deemed taboo. But if there’s one person in the entire world who can pull off this controversial, “business in the front, party in the back” hairstyle, it’s Robyn Rihanna Fenty. In a video posted on Instagram, the singer showed off her new mullet while modeling the Savage x Fenty Valentine’s Day collection.

But this isn’t Rihanna’s first time at the mullet rodeo. She’s been sporting it on and off for almost a decade. Talk about dedication! The mullet made its debut at a gas station back in 2013.

Several other celebs have been rocking the mullet lately, such as Miley Cyrus (whose dad, Billy Ray Cyrus was known for his mullet in the ‘90s), Maisie Williams, Barbie Ferreira, and Keke Palmer. But we gotta give props to Rihanna for being the originator of the modern mullet.

Who can forget back in 2013 when she paired a mullet with blue lipstick?

Rihanna’s mullet was the perfect ‘do to sport while running errands. How good did it look with her cut-off shorts?

Riri described her look as “ghetto goth” during her 2013 mullet era.

Who can forget the time she and her mullet were a vision in red?

Or this global look?

She and her mullet also look just as good in a t-shirt and jeans.

Years have passed since she first debuted the mullet, but in 2020, Rihanna unearthed the iconic hairstyle yet again.

Rihanna wore a wavy version of her mullet to announce that her Fenty Beauty skin care line was coming to Sephora.

She also rocked her mullet while wearing a cherry print bikini, proving she can truly wear this look with anything.

Wearing a mullet like a queen, revolutionizing the beauty industry, walking on grates in high heels…what can’t Rihanna do?