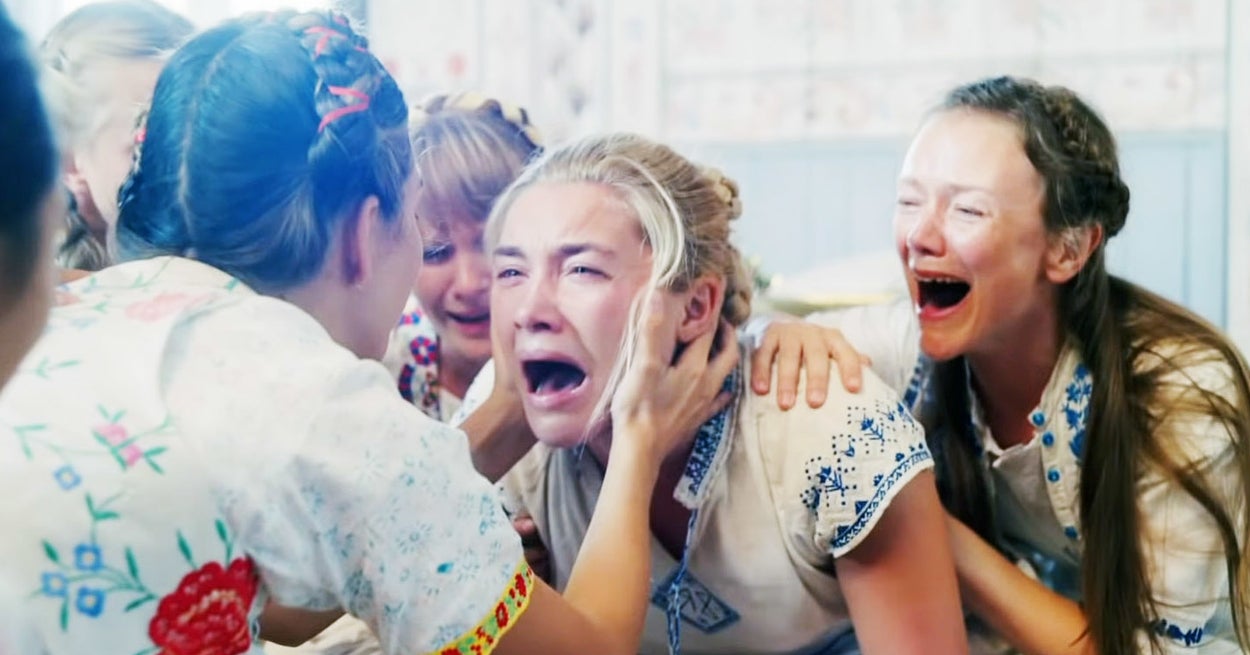 If you’ve watched Midsommar, then you already know that Florence Pugh — who played Dani — carried that entire film on her back.

In one scene in particular, after being crowned May Queen, Dani sees her boyfriend take part in a sex ritual and proceeds to have a massive panic attack, in which she vomits and sobs loudly — all while the Hårgan women surround her and mimic her sobs.

It’s one of — if not the most — intense scenes in the movie, and Florence just shared a behind-the-scenes photo of that moment on Instagram, along with the story of just how difficult it was for her (as well as the rest of the actors) to film it.

She said, “I’ve been waiting for a long time to post this picture. I knew when I took it that I had captured a special moment/day between all of us. This was THE scene. The scene which, all who were included knew exactly how many days there were until we shot it.”

“The scene where we would all throw our guts out on the floor and war-cry and scream in each others faces. Luckily, Ari wrote exactly what we needed to do. We needed to grieve within under a minute. We needed to start every take fresh faced and end it with snot and salty tears on our arms, chest, cheeks, and hands.”

“In the film my character had just seen something truly horrifying, so heartbreaking that she vomited 10 seconds after viewing it. The Hårgan women collect her in pieces and instantly march her to a quiet place and mirror her emotions back at her. Hårgan way is to share emotions, feelings, and pain. They want to share any form of trauma (and joy) so that you don’t go through it alone.”

“So every single woman in this scene knew, that on this day, we would attack something truly scary and truly hard and this picture captures the moment our first AD said we wrapped on the scene.”

“I remember the first take being so long, much longer than is displayed in the film that you all watched. When Ari said cut, we all clung on to each other’s arms and dug our nails into each other’s palms and wept. Sobbed. Heaved. I remember it being really hard to stop.”

“I’ve never been an actor that finds it easy to cry on camera, it’s something very personal to me and despite finding all other aspects of acting exciting and thrilling, I find crying very scary and at some points in my career, directors having to change the scene because I couldn’t do it. On this film, in this scene, I found a true sisterhood.”

“We all looked at each other before we started rolling and knew it would be hard. And awkward. And strange. And unnatural. We knew it wouldn’t be pleasurable. But by the end we would roll in each other’s laps and cry and allow our bodies to keep heaving. That’s the funny thing about filming, you get it all ready to shoot and then someone says cut and sometimes (and beautifully) your body doesn’t understand ‘cut!’ And just keeps feeling.”

“I documented this moment because I knew I probably wouldn’t see all these woman like this again. Even more worryingly, I may never work like this or see these women again. I may accidentally cross paths like people do in this weird and crazy life. Or I may find these talented women on another film set, but as much as I wish that, that only rarely happens.”

“But I knew, I would never be so open and so raw and so exhausted like I was that day ever again, I can hope at least. We got up from our knees, after two hours of screaming and wailing and grieving. We held each other. We looked at each other. We nervously giggled, and cried some more. Then we went home.”

“Scenes that make you hurt, or cringe, or turn away from the screen when watching, are scenes that were designed to make you feel for 10 seconds at least, the most human. But for us, it was hours. Beautiful, hard, proud hours.”

As a bonus, Florence also shared some fun facts about the big feast scene, like: they all had to wear sunglasses in between takes, the food began rotting by day three of shooting, umbrellas had to be used to prevent actors from overheating, and how making Midsommar was “exhausting, but beautiful.”

It’s still unclear to me how Florence didn’t get an Oscar nom for the crying scene alone, but at least we know she put every one of those tears to work in that role.