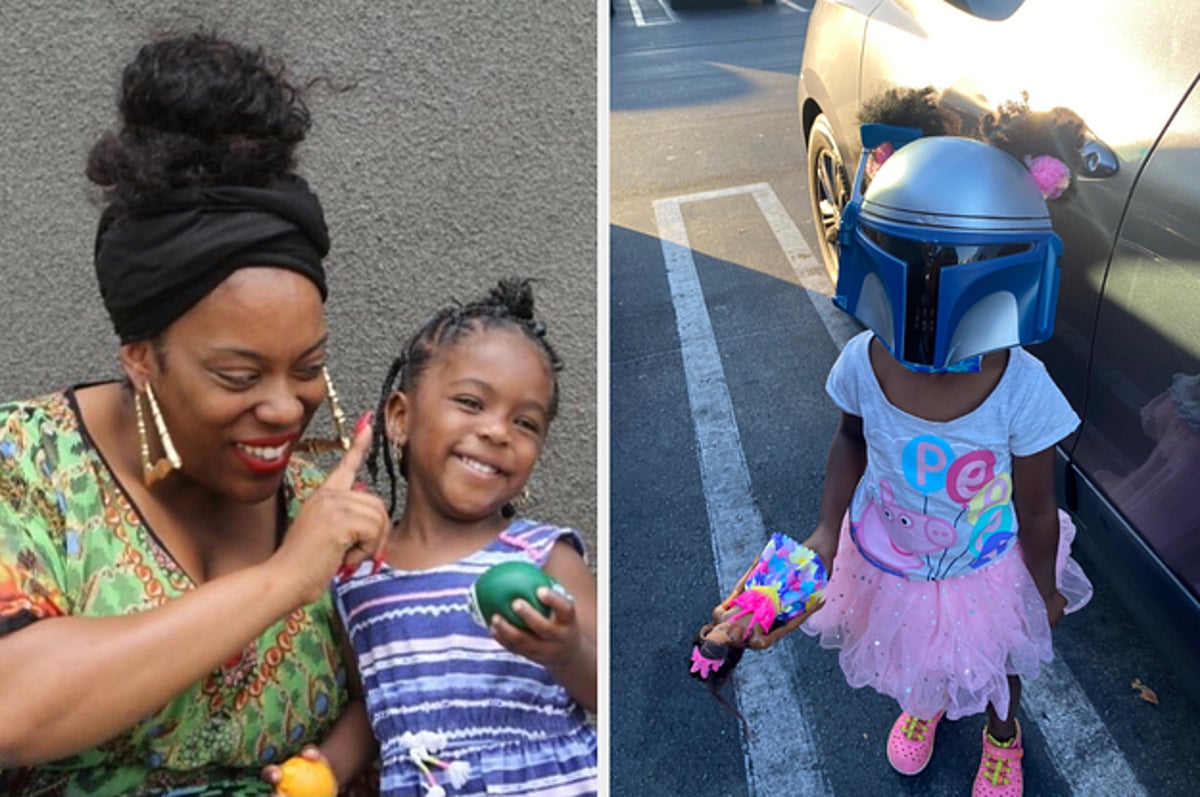 With everything going on this year, Raena Granberry wanted to get the Christmas cheer going early.

Granberry, 38, was getting ready to go to Michaels to buy some decorations on Saturday, and told her 5-year-old daughter Justice to go get her mask. Justice did, but it wasn’t exactly the mask that Granberry was expecting.

“I told my daughter to grab her mask so we can go to the store. This was the mask she grabbed,” Granberry wrote on Twitter, along with a picture of Justice in her tutu, holding a barbie doll, and wearing a costume mask from The Mandalorian, Disney+’s Star Wars series.

Justice, who loves Christmas lights and was in the middle of eating pancakes when she spoke to BuzzFeed News on Sunday, said that she wore the Mandalorian mask “cause it was awesome.”

Granberry asked her to put on a cloth mask too, and Justice kept both on for most of the shopping trip. Justice said it was fun to wear the Mandalorian mask and that she likes it better than her cloth mask.

The whole family is into Star Wars and Justice said her favorite character is actually Rey Skywalker, the heroine and lead in the most recent Star Wars movie trilogy. In fact, Justice was Rey for Halloween this year.

“She has a sword,” Justice said. “She has a lightsaber, and she has this little robe around her costume so it can protect her. And she lives in the wild.”

She wasn’t able to go trick or treating because of the coronavirus, but she did get some candy and watched a movie.

Granberry, who works on Black maternal health with the Los Angeles Department of Public Health, said she had faced her own challenges during her pregnancies.

She said the experiences have made her feel “ultra-fortunate” to have both of her children and just wants them to be happy and be who they are.

“Let these kids be who they are, they’re gonna be that anyway, so the more you foster it and love them and let it be, the more awesome they get to be and shine for the world and make them happy,” said Granberry.

Like millions of families, Granberry’s family was also affected by the pandemic.

Justice started kindergarten this year and it’s been hard to sit at the computer all day without her friends, her mother said.

“It’s been difficult at times,” said Granberry. “She has fun, but sometimes she cries in between. But she’s got a great teacher and we’re making it work.”

Granberry had to start working part time in order to help the kids with school, which meant a pay cut, and her husband George works in management at a cemetery, which he says has been more stressful than usual because of the pandemic.

“I just think this entire year has thrown us all for a loop,” Granberry said. “People really want some light, some joy, like we’re looking for it all the time…Kids are just so pure and happy, it kind of makes you forget all of the mess.”

Granberry’s tweet has now gone viral with more than half a million likes on Twitter, and thousands of comments, including one from Pedro Pascal, the actor who plays the main character in The Mandalorian.

Justice’s mask also won praise from Daniel Logan, the actor who played Boba Fett, the Mandalorian warrior and bounty hunter in the movie Star Wars: Episode II – Attack of the Clones and who voiced the character in the Clone Wars series.

And of course many, many people commented “This is the way,” referencing the famous Mandalorian mantra.

George, who has loved Star Wars since he was a kid, said it’s been fun to see his own kids enjoy the series.

“I grew up on it, of course. Just being a Star Wars fan as a child, the things that I enjoyed are the things I try to share with them,” he said. “It’s been fun to watch them really kind of take to it…and really start to embrace the movies and the entire culture.

George said the picture is important because it reflects the family’s values and the importance of wearing a mask during the coronavirus pandemic.

“I think the picture is important [because] it portrays what we really want, and that’s for people to wear the mask.”